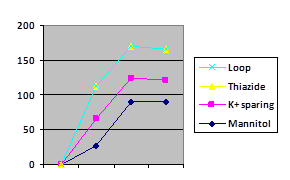 Where dose is on x-axis while Na+ excretion is on y-axis.

Can be absorbed orally.

Site of action is within the lumen of nephron. They reach the site of action partly by filtration and mostly by active tubular secretion. After I/V injection, they produce dieresis within minutes.

Greater K+ leads to extrusion leading to greater positivity, which pumps K+ by transcellular pathway along with Mg++ and Ca++.

Na+ and K+ are not reabsorbed and positive potential does not develops. They indirectly lead to decreased Mg++ and Ca++ reabsorption. Na+, K+ and Cl- are excreted along with Ca++, Mg++. Chronic use may lead to

But hypocalcaemia does not develop because calcium is reabsorbed by distal convoluted tubule by separate mechanism.

Hemodynamic changes are probably prostaglandin mediated, producing vasodilatation. Redistribution of blood occurs, mainly in the kidneys. Intra renal blood flow increases under the action of loop diuretics. Venous return to the heart decreases, secondary to vasodilatation. Decrease in pulmonary congestion occurs, as well as decrease in left ventricular filling and decreased work load (preload). This effect is seen before any diuretic effect and is separate form it.

Pulmonary edema might be a complication of CCF but CCF, itself is different. Loop diuretics are effective in CCF as they decrease work load, as heart is not pumping enough blood,

If CCF is secondary to hyperaldosteronism (nephritic syndrome, cirrhosis, CCF) it puts extra pressure on heart.

Loop diuretics decrease the blood volume and Na+ load, decreasing the neural activity along with Ca++ levels, while increasing the vasodilatation.

Torsemide has short duration of action.

These conditions can be treated by loop diuretics. They reduce the reabsorption of Ca++, but by themselves, do not produce hypocalcaemia because:

If combined with infusion of 0.9% NaCl, can lead to increased excretion of Ca++. In this case there is no volume depletion. Although some calcium is still reabsorbed, Ca++ excretion does take place.

Loop diuretics are most efficacious in mobilizing the fluid.

In emergency, K+ excretion can be increased by

Hypovolemia must not develop, so are combined with 0.9% NaCl.

(Due to toxins or pigments overload)

Normally acute renal failure resolves automatically. Hemodialysis or peritoneal dialysis may be used. If secondary to hemolysis, loop diuretics can be used I/V as test drug. It can convert oliguric phase to non oliguric phase, which is helpful in excretion of K+. Loop diuretics do not shorten the duration of disease, but are still helpful.

Halides are reabsorbed at ascending thick limb, just like Cl-. Their reabsorption is also blocked, as are also univalent ions. In cases of poisoning due to these ions, loop diuretics can be given along with 0.9% NaCl.

Main complaint is the fullness of ear, tinnitus, hearing loss and disturbance of ionic balance of endolymph. As Na+K+2Cl- is present in internal ear, so ionic balance is also disturbed, leading to ototoxicity.

a. Same mechanism is present in S2 for loop diuretics and uric acid. Competitive inhibition of tubular secretion leads to hyperuricemia.
b. Volume depletion leads to increased reabsorption of uric acid, which may precipitate gout

As loop diuretics are used for hypertension and in CCF, basic investigations of uric acid levels must be done prior to starting the treatment.

No separate mechanism is present for Mg++, the levels of which decrease by long term usage. This might be a risk factor in cardiac arrhythmias.

Loop diuretics may also lead to:

a. Cross – reactivity with sulphonamides

If liver is not functioning, hypoproteinemia and decreased plasma oncotic pressure occurs, leading to exudation of fluid and development of edema or ascitis, known as third space hypovolemia.

As a result kidneys perceive hypovolemia and increase renin secretion. In this condition, aldosterone antagonists are preferred. Sometimes loop diuretics may be combined. But overuse is counter productive, as will lead to decreased volume and decreased blood flow to liver, worsening liver functions.

If heart is not pumping enough blood, salt and water retention occurs. Blood volume has to be decreased. If it is reduced too much, it decreases venous return. Overaggressive therapy might be harmful.