The entry and development or multiplication of an infection agent in body of man or animal is called infection. The infectious agent can be virus, bacteria, fungi, parasite etc.

This results from the infectious agent when it produces signs and symptoms.

Where infectious agent fails to produce signs and symptoms but infectious agent survives and multiplies in the body of man or animal and is capable of being transmitted to another susceptible individual or animal.

When infection is present in the body but does not produce any sign and symptoms and at the same time cannot be transmitted to a susceptible host during the period of latency i.e. Herpes simplex, Syphilis.

This period is the interval of sub clinical infection during which the previously active infectious agent becomes dormant in the host.

In the case of commensal or low grade pathogen, the multiplication may cause little or no harm to the host and may best be described as colonization.

An illness due to a specific infectious agent or its toxic products. This arises through transmission of that agent or its products from an infected person, animal, or inanimate reservoir to a susceptible host, either directly or indirectly through an intermediate plant or animal host, vector, or the inanimate environment. 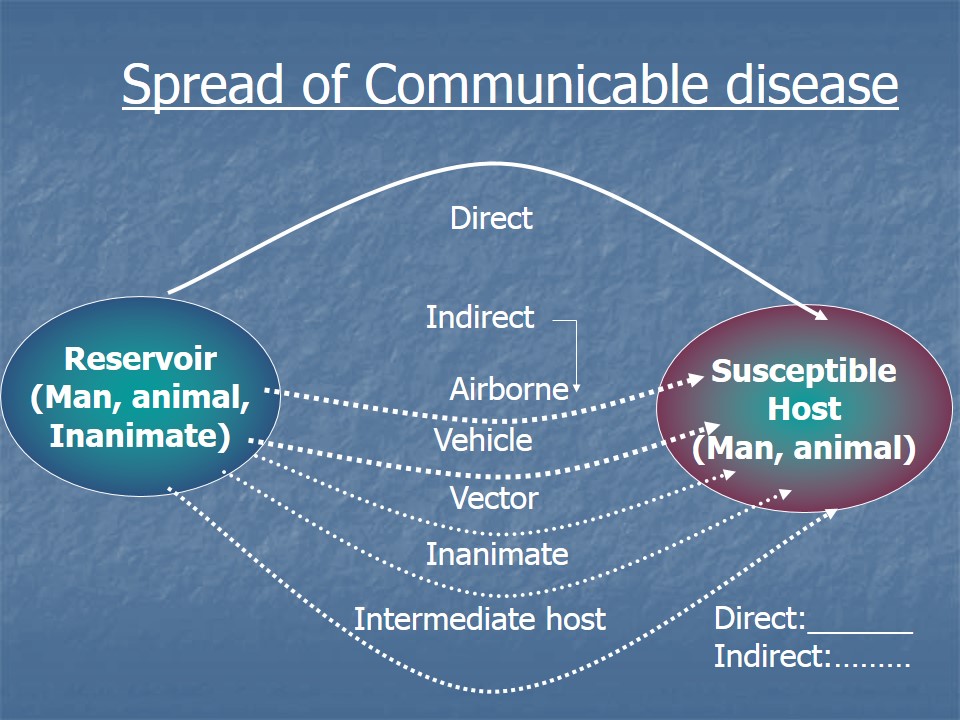 These infection are transmitted through the agency of water, food, ice, blood, serum, plasma, and other biological products e.g. tissues and organs.

These infection are transmitted by an arthropod or a living invertebrate carrier such as snails or Cyclops.

Fomites refer to inanimate objects such as handkerchiefs, bed linen, towels, books, spoons, forks, etc., which have been soiled with infective material. Freshly soiled fomites are likely to spread the agents of infection.

This refers to the presence of organic material or micro – organisms on the body surfaces, articles or inanimate object.

Pollution refers to the presence of both inorganic and organic matter such as offensive material like trade effluvia or industrial pollutants.

Any person, animal, arthropod, plant, soil or substance (or combination of these) in which an infectious agent normally lives and multiplies, on which it depends primarily for a prolonged survival and where it reproduces itself in such a manner that it can be transmitted to a susceptible host.

A person or animal that harbors a specific infectious agent in the absence of discernable clinical disease and serves as a potential source of infection.

Based on Stage of Disease

a. Incubatory carriers e.g. Hepatitis
It is that type of the carrier which transmits micro-organism during incubation period of the disease.

b. Convalescent carrier e.g. typhoid
This carrier transmits micro-organisms during the period of convalescence or recovery.

c.  Healthy carrier e.g. Typhoid
An individual with an infection that is in- apparent throughout its course but can transmit infection to others, is commonly known as a healthy carrier.

A person or another living animal including birds and arthropods that affords subsistence and lodgement to an infectious agent under natural conditions.

A. Types of Host

Hosts in which parasite attains maturity or passes its sexual stage, are primary or definitive hosts.

Hosts in which the parasite is in larval or asexual stage, are secondary or intermediate Hosts.

A transport or propagative host, is the one in which, the organism remains but does not undergo development.

It is the resistance usually associated with the presence of antibodies or cells having a specific action on the microorganism concerned with a particular infectious disease or on its toxin.

The sum total of natural body mechanisms which interpose barriers to the progress of invasion or multiplication of infectious agent or the damage by their toxic products.

A person or animal presumably not possessing sufficient resistance and immunity against pathogenic agents to prevent contracting infections or diseases if or when exposed to  the agents.

It is a type of symbiosis in which there is reciprocal benefit to both the host and parasite.

It is a relationship where the host gives the food and shelter to the parasite. It can either move to the mutualism or parasitism. It is neither good nor bad.

It is of unilateral benefit to the parasite only and harmful for the host.

Spectrum of an infectious Disease

The sequence of events beginning with the exposure of a susceptible individual to an pathogenic agent and ending with a patient’s recovery or death is illustrated in the following diagrams. 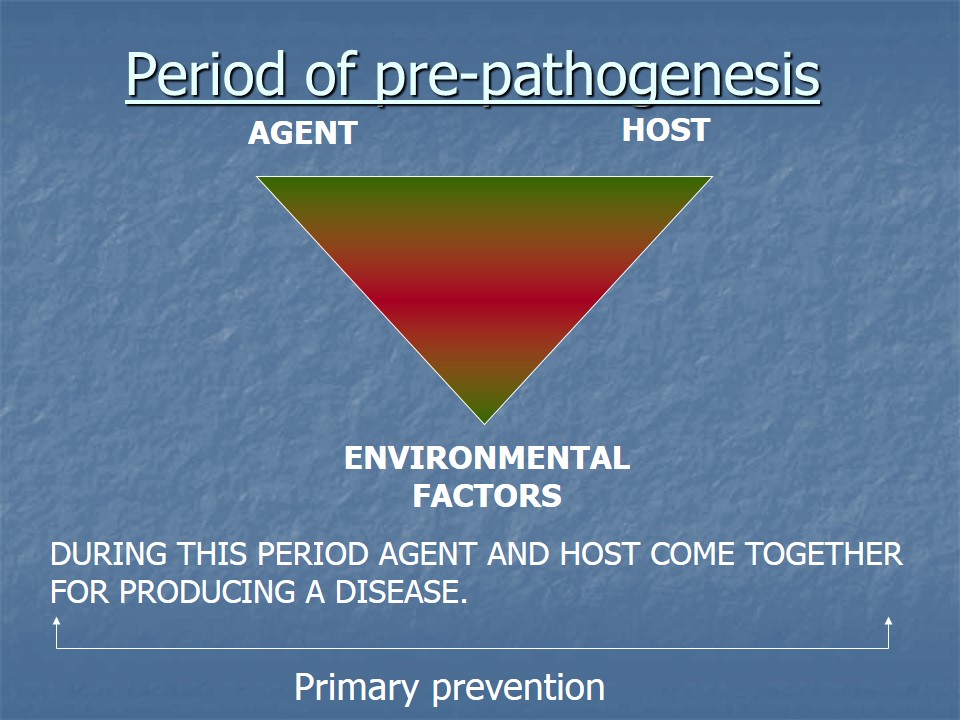 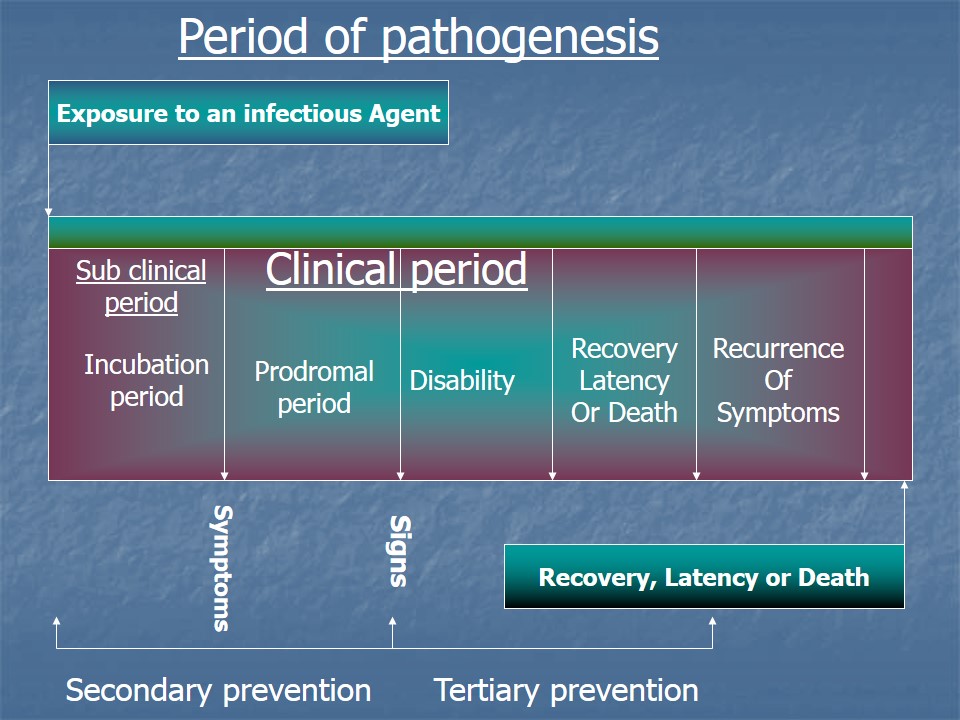 This aims at avoiding the emergence of those factors which are known risk factors of diseases. e.g.  Curbing (initiation control) the habit of cigarette smoking.

Primary prevention is a reduction in the incidence of disease through immunization, sanitation, education, or other means of eliminating pathogenic contamination in the human environment.

This is applied in the period of pre-pathogenesis and includes measures on general health improvement and specific measures for prevention of health problem.

This is applied in the period of pathogenesis and aims at early detection of the disease followed by its treatment.

Pap smears for the early detection of cervical cancer and surgical intervention if necessary.

This is applied in the period of pathogenesis and extends in the period of recovery. It aims at reducing impairments/disabilities and helping patients to utilize the residual capacities maximally.

Shortly after the occurrence of hemiplegia secondary to stroke, bed care and physiotherapy are employed to prevent the development of decubitus ulcers and flexion contractures.

Any loss or abnormality of psychological, physiological or anatomical structure or function.

Any restriction or lack (resulting from an impairment) of ability to perform an activity in the manner or with in the range considered normal for a human being;

A disadvantage for a given individuals, resulting from an impairment or a disability, that limits or prevents the fulfillment of a role that is normal (depending on age, sex, and social and cultural factors) for that individual.

A classification of Agent, Host, and Environmental Factors that determine the occurrence of diseases in human populations