Four basic tests are used for identifying bacteria in the lab, these include: 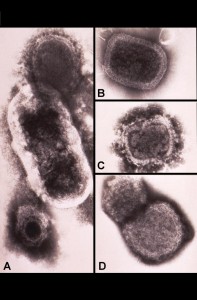 In addition to gram staining, colonial morphology (appearance of colonies of bacteria on culture plate) gives us a hint about the identification of bacteria. Some colonies are round, some are flattened, some appear mucoid and some give alpha or beta hemolysis.

Catalase is produced by some bacteria, which breaks down hydrogen peroxide into water and oxygen. This test is performed from bacterial growth on culture media and is used to differentiate Staphylococci from Streptococci. Staphylococci are catalase positive while Streptococci are negative.

It is used to differentiate Staphylococcus aureus from other species of Staphylococci, which are coagulase negative.

The organisms producing oxidase will oxidize tetramethyl-p-phenylene diamine to a deep purple colored compound which helps to identify pseudomonas, vibrio and Neisseria species.

Bacteria have the ability of fermenting or breaking down the carbohydrates and alcohols, and this ability is used in their identification. Carbohydrates and alcohol used in standard sugar tests are lactose, sucrose, glucose, mannitol and maltose. The basic nutrient medium is peptone water, in which sugars are prepared or added and indicator dye is also added, which changes color with the change of pH. Commonly used sugar sets are:

Apart from self made sugar sets, commercially available sets by the name of analytical profile index (API) can also be used.