Sugar set comprises of certain biochemical tests which are used in the identification of enterobacteriaceae.

Procedure
Inoculate the test organism into urease agar slope and incubate for 24 hours at 37 C. appearance of pink color indicates a positive test, showing the organism is urease positive. Bacteria that produce urease are Proteus, Klebsiella and Helicobacter species.

Principle
This test demonstrates the ability of certain organisms to breakdown the amino acid, tryptophan, into indole and the production of indole is detected by incorporation of Kovac’s reagent.

Principle
The test is based on the capability of bacteria to utilize different sugars.

Composition
Important components are:
a.    Ferrous sulphate
b.    Glucose
c.    Lactose
d.    Sucrose
e.    Phenol red indicator
The medium in tube is poured so that it makes a solid, poorly oxygenated area on the bottom called ‘butt’, and an angled well oxygenated area called the ‘slant’ at the top. Organism is inoculated into butt and across the surface of the slant. The tube is then incubated at 37 C for 24 hours. 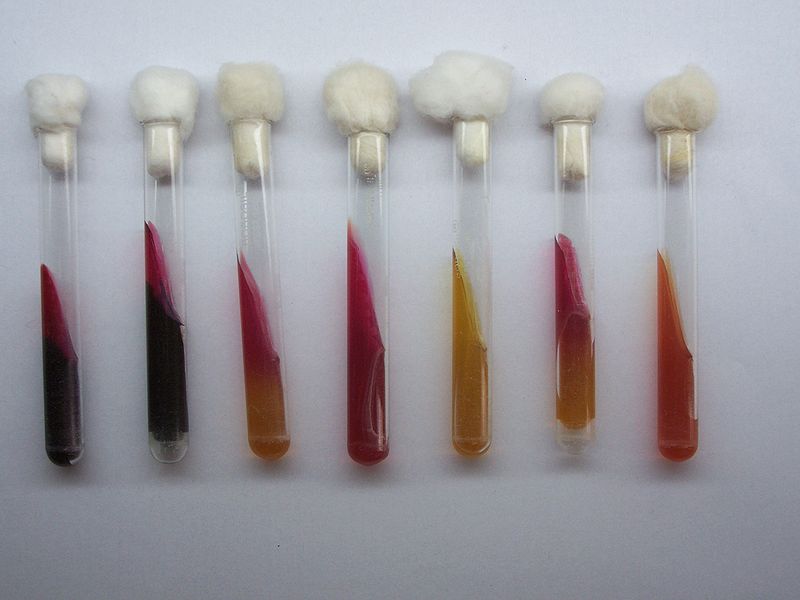 The interpretations of this test are:
a.    If the lactose or sucrose are fermented, a large amount of acid is produced which turns the phenol red indicator to yellow in both the butt and the slant. Some organisms generate gases which produce bubbles in the butt.
b.    If the lactose is not fermented, but small amount of glucose is, the oxygen deficient butt will be yellow but on the slant acid will be oxidized to carbon dioxide and water by the microorganisms, so the slant will appear red.
c.    If neither the glucose, lactose or sucrose is fermented, both butt and slant will be red, owing to the production of ammonia from the oxidative deamination of amino acids.
d.    If hydrogen sulphide is produced, black color of ferrous sulphide is produced.

Principle
This test is used in differentiation of enterobacteriaceae like Klebsiella pneumonia, Vibrio cholera and some strains of enterobacter. These bacteria utilize glucose with the production of acetoin, which can be detected by the oxidation to diacetyl compound, which forms a pink compound with an indicator.