Somatic antigen and flagella antigen are present. A large number of bacteria, i.e. 1 billion, are required for colonization as are sensitive to hydrochloric acid in stomach. Pathogenesis depends on colonization of the small intestine by the organism and secretion of enterotoxin.

•    Vibrio attaches to the cells of the brush border of the gut, with aid of bacterial enzyme, mucinase.
•    Mucinase dissolves the protective glycoprotein coating over the intestinal cells.
•    After attachment, the bacteria multiply and secrete enterotoxin, choleragen. Choleragen consist of 2 subunits, ‘A’ inserted into cytosol and ‘B’ binds ganglioside receptor on the surface of the enterocytes.
•    ‘A’ submit catalyses the addition of ADP- ribose to the G protein, thus stimulating G protein. 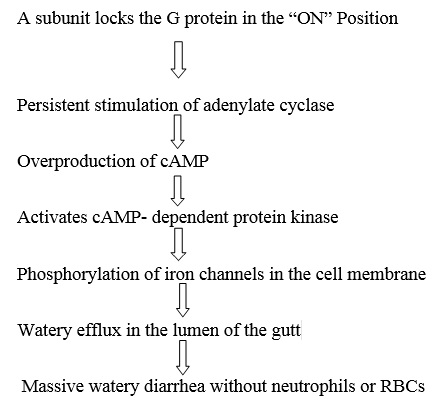 Specimen
For stool culture, blair or transport medium should be used.

Vibrio parahaemolyticus is a marine organism transmitted by ingestion of undercooked seafood. It has unknown pathogenesis, but enterotoxin is similar to choleragen. It is also halophilic.

Biochemical tests are similar to V. cholera, except it does not ferment sucrose.

Vibrio vulnificus is a marine organism, found in warm salt waters. It causes cellulities, especially in shellfish handlers. It causes rapid fatal septicemia in immune-compromised people eating raw fish containing the organism.
It produces hemorrhagic bullae on the skin as well. Chronic liver disease is a predisposing factor.
Doxycycline is given for treatment.