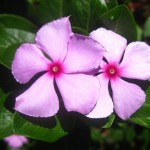 Photo of Catharanthus roseus, source of alkaloids by tonrulkens

Alkaloids are the nitrogenous compounds having complex structure.

They are obtained from plants.

They are bitter in taste.

Alkaloids are basic in nature.

Alkaloids are not soluble in water but are soluble in alcohol. Their salts are water soluble.

Glycosides are non-nitrogenous compounds having complex structure similar to the alkaloids.

Glycosides are obtained from plants

Glycosides are hydrolyzed by enzymes and acids into two portions:

If sugar portion is glucose, glycosides are known as glucosides.

English name ends in “in”.

Examples include cardiac glycosides such as digitoxin and digoxin, gitoxin and gitalin.

Fixed oils are the esters of higher fatty acids.

Fixed oils are obtained from plant as well as animal sources.

They are not soluble in water but are soluble in alcohol, chloroform and ether.

Fixed oils are bland and non-irritating.

They leave a greasy mark on paper.

With alkalies, they form soaps.

They serve as nutrients and emollients (soften the skin).

They are slightly soluble in water.

They impart smell and taste to water.

They are highly aromatic compounds.

They are usually solids like camphor, thymol and menthol, but may be liquids as well, like oil of Eucalyptus (Eucalyptol).

Differences Between Volatile and Fixed Acids

Fats are the fixed oils. These include the triglycerides.

They are solids at room temperature.

Fats are obtained from plants as well as animal source.

Saponins resemble glycosides and are the emulsifying agents.

These are obtained from the plants.

Saponins are neutral in reaction.

Saponins are toxic and cause hemolysis of RBC’s.

With water, saponins form a clear solution which makes soap like foam on shaking.

Waxes are the esters of fatty acids with monohydric alcohol. They are the complex mixtures and are used in the formation of ointments, topical preparations.

Resins are the solid and brittle oxidized volatile oils which form soaps with alkalies. They are soluble in alcohol.

Examples include colophonium and podophyllum.

Oleoresins are the resins dissolved in volatile oils. E.g. Copaiba.

Gum resins are the combination of gums and resins and are the exudates of plants. Examples include Myrrh and Asafetida.

Balsams are the resins in combination with benzoic acid with or without cinnamic acid. Examples include Benzoin, Peru and Tolu.

Tannins are the non nitrogenous compounds which are precipitated by metallic salts and alkalies. They are mucosa and leave a blue inky color with iron. They are hydrolyzed to tannic acid. They act as astringents which harden the mucous membrane by coagulation of proteins.

Neutral principles do not confer to any special group and include Santonin and Aloin.