In most of the cases, anti tussives are combined with mucolytics, mucokinetics and anti histamines (sedatives, anticholinergics are combined as well).

It is a protective reflex with sudden noisy expulsion of air , expelling sputum & other irritant materials from upper part of airways.

It is due to local irritation, e g smoker’s cough.

Drugs which suppress cough & are used for symptomatic treatment of cough.

2 types according to mechanism of action 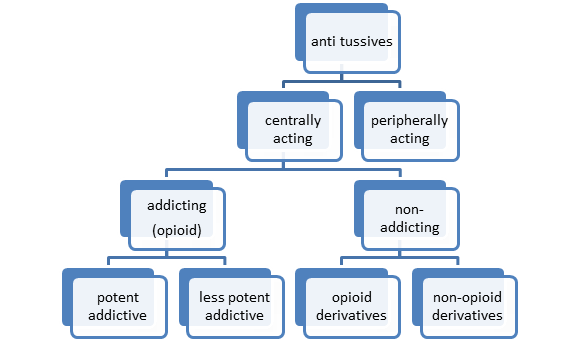 Suppress cough by a direct action on medullary cough center.

They suppress cough reflex by decreasing the input of stimuli from cough receptors in respiratory passages.

Anti-tussive Drugs should be used to suppress unproductive / useless cough.

4)      If patient is suffering from hernia, piles or underwent abdominal surgery

Mechanism of action of antitussives

Devoid of opioid effect but has some sedative property.

These have sedative, demulcent properties.

Chemically related to Procaine, which is local anesthetic. It has both central and peripheral actions.

Mechanism of Action of Mucokinetics

For symptomatic relief of dry, non productive cough in the presence of mucus in respiratory tract.

Drugs which render sputum less visous so that sputum is more easily cleared from chest.

Reduces viscosity of bronchial secretions by de-polymerization of muco-polysaccharides as well as liberating lysosomal enzymes , network of fibers in tanacious sputum is broken.