Antibiotics Used Against Fungi -Amphotericin B, Griseofulvin and Nystatin

Polyene is a term used for agents consisting of large number of double bonds. Macrolides are molecules having more than 12 atoms.

Hydroxyl groups are capable of producing mechanism of action as antifungal.

Sterol component in fungal cell membrane is ergot instead of cholesterol.

Has amphipathic character, both lipophilic (due to choline) and hydrophilic components. 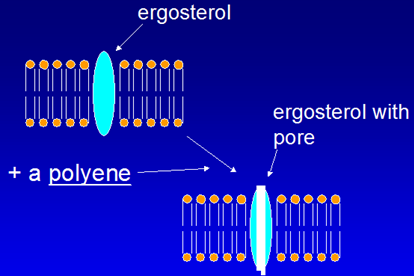 Some binding of amphotericin B with human tissues is responsible for side effects.

Spectrum of Activity (The broadest spectrum)

Seen when given I/V. Manifested by:

Due to renal damage. When therapy is stopped, anemia is corrected.

When given intrathecally for fungal meningitis, producing neurotoxic effects including headache and seizures.

Care is taken to avoid neurotoxicity.

Systemic drug used for local infection and not systemic. Uses are declining, grouped with antibiotic group. Obtained from same source as penicillin.

Should be given for prolonged period so that growth of newer skin, hair are devoid of fungal infections.

Tinea infections of skin, hair and nail due to:

Cure rate high given for Weeks to Months

A polyene macrolide obtained from penicillin.