Barbiturates were used as sedative/hypnotic for a long time. Now non-preferred because of:

Still have place in clinical applications.

– Barbituric acid nucleus is essential, which has no sedative activity itself

Carbon 5 substitutions give rise to various barbiturates like aryl and alkyl groups, responsible for sedative activity.

When desulfuration occurs, oxybarbitone is formed. 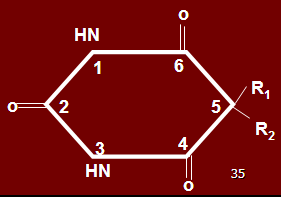 Performance is impaired for 10-22 hours for purposes of driving, flying or handling machines

a. Sedation/hypnosis & anesthesia
– Can produce all degree of CNS depression

– Sedation/hypnosis – anesthesia – coma depending on dose

There are chances of laryngeal spasm, coughing and hypoxic drives.

Laryngospasm is a complication of barbiturates, so no longer preferred when used as anesthetic.

Automation occurs when barbiturates are taken by elderly. The sleep is less satisfying and they forget that they had taken the tablet, repeated night awakenings compel them to take another tablet, and thus they keep on increasing the dose. This may be fatal. They may become even more irritable.

2. Used in psychoanalysis (abreaction) in psychiatry

3. Treatment of hyperbilirubinemia in neonates & kernicterus. Also in Criggler Najjar syndrome. They induce the enzymes which conjugate bilirubin.

7. In hypnosedative withdrawal, although benzodiazepines are preferred, phenobarbitone is still used

8. In children, for per rectal administration of induction anesthesia, sedation (can give methohexitol)

9. Even in hepatic jaundice

2. Compete for plasma protein binding site with other drugs

Sedatives and Hypnotics -An Introduction