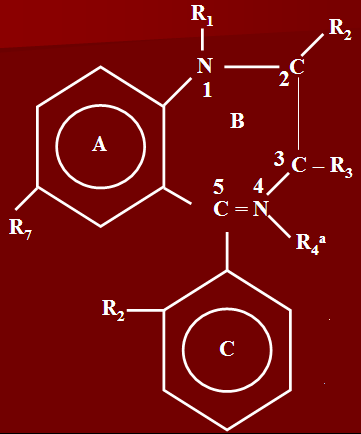 Position 7 of ring B is substituted with chloride or nitro group.

There are more than 60 benzodiazepine structures differentiated by duration of action and pharmacokinetic profile. Position 7 is important.

Site and Mechanism of Action

GABA is the inhibitory neurotransmitter in CNS, it is of two types:

Receptor is further divided into alpha, beta and gamma subunits.

Benzodiazepines act by enhancing presynaptic/postsynaptic inhibition through a specific BDZ receptor which is an integral part of the GABA receptor chloride channel complex, located on supramolecular complex.

Benzodiazepines are GABAERGIC, they potentiate the inhibitory neuro-transmission of GABA in various parts of CNS.

In absence of GABA, benzodiazepines are inactive.

Benzodiazepines when administered  they bind with their own receptors, they Displace GABA modulin from GABA receptors, increase GABA Binding, Increase frequency of opening of Cl- channels – increase  influx of chloride through GH Cl channels in neurons membrane, Resulting in hyperpolarizations.

Besides benzodiazepines, other ligands bind as well like barbiturates and antagonists too.

There are a large number of compounds, administered mainly orally having various rates of absorption.

All members are well absorbed after oral administration, which exception of Oxyzepam and lorezepam, which are absorbed slowly.

They have a strong protein binding, thus have a chance of accumulation in the body fat.

Oral route is preferred. Also given I/V (5-10 mg diazepam for status epilepticus). Not well absorbed by I/M route. Lorezepam is given I/M. 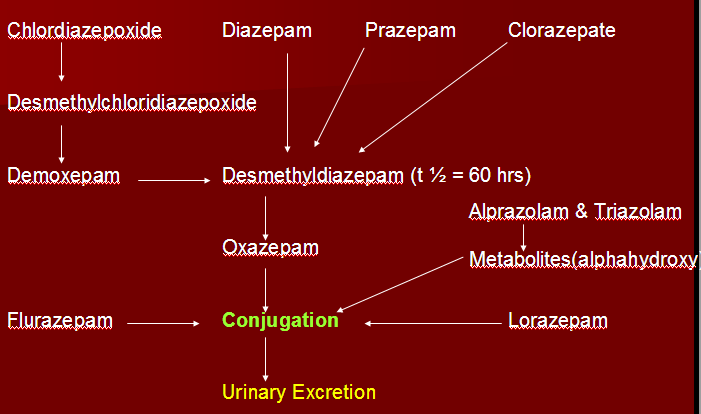 Chlordiazepoxide has been removed from market because of chances of respiratory and cardiac depression.

Clorazepate is a prodrug

Desmethyldiazepam is an active metabolite

Oxazepam and Lorazepam are short acting, used for daytime sedation

Flurazepam is converted into three active metabolites (hypnotic use):

Diazepam and Clonazepam are used.

Increase in tone of muscles is a common feature of anxiety; benzodiazepines produce relaxation by acting on medullary areas.

Even at highest dose, complete anesthesia is not produced, as there is some awakening.

Safest drugs if used rationally. Side effects are of hypnotic doses these include:

Advantages of benzodiazepines over barbiturates

It is the suppression of responsiveness to a constant level of stimulation with decreased spontaneous activity and ideation.

-Antipsychotic & Tricyclic antidepressants do not have this effect.

-Behavior disinhibiting effect, although they can cause sedation.

Increase in dose leads to hypnosis

Latency of sleep decrease (time to fall a sleep)

6. Effects On CVS and Respiration

Sedatives and Hypnotics -An Introduction