Fraction of the dose of a drug contained in any dosage form that reaches the systemic circulation in unchanged or active form administered through any route is known as bioavailability.

Drugs not absorbed by the oral route are highly polar drugs, thus have low bioavailability.

Where AUC is the area under the curve 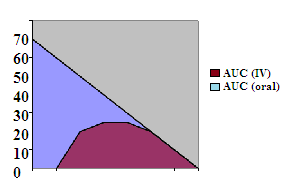 By rectal route, half of the drug undergoes first pass metabolism.

Chloramphenicol, an antibiotic, administered by intravenous route has bioavailability less than oral route because it is present in pro form and has to be activated in the intestines.

Glyceryltrinitrate is administered sublingually, by oral route it has almost 0% bioavailability.

Lignocaine is a local anesthetic and antiarythmic drug, its bioavailability by oral route is also 0%.

Highly polar drugs also have 0% bioavailability. They are  not absorbed from the intestine. Examples include streptomycin and gentamicin.

The effect of first pass metabolism on bioavailability is measured by extraction ratio.

Where clearance is the amount of drug cleared from the unit plasma in unit time by liver.

Drug may be destroyed by the HCl or enzymes present in the GIT. Benzyl penicillin is not given orally because it is destroyed by HCl. Parenteral route is generally preferred.

Quality control is related mainly to different brands. One drug might be manufactured by different companies. These brands have different bioavailability although the drug is same. The difference lies in the manufacturing process.

Greater the size, smaller is the absorption. Size is inversely proportional to bioavailability. Small particle size is important for absorption of corticosteroids, chloramphenicol and griseofulvin.

Inactive ingredients which do not have pharmacological action. These are important when the drug is given in solid forms (tablets, capsules, pills). Drug before absorption must disintegrate and dissolute. Disintegration and dissolution may differ with different brands. If dissolution time is more, bioavailability will be less and vice versa.

These are added to:

Excipients are the inert substances added to the tablets or pills to increase their bulk because sometimes the dosage is very small.

Diluents and excipients may affect bioavailability of different brands. They may bind with the active principle. Sometimes when the patient is taking one brand for a very long time, suddenly bioavailability may change by changing the company.

If tablets or pills are more tightly bound, the bioavailability is decreased.

a. If the moisture content is more, disintegration time is less

b.   Sometimes some drugs when have more moisture, form lumps in the stomach, which decreases their absorbance.

The time in which a solid dosage form administered orally releases the active drug for absorption is called disintegration time.

With the same brand, dosage form manufactured by different companies may differ in bioavailability.

If two similar drugs perform the same effect, have same efficacy and toxicity, then they are called therapeutically equivalent.

If two drugs are manufactured according to the same principles and criterion layed down in pharmacopoeia (official book published by country to manufacture drugs in that country), then they are called chemically equivalent.

Anti tuberculosis drugs have to be continued for six to nine months. Recurrence of disease might occur on changing to brand with less bioavailability, although symptoms disappear after four weeks. Bacteria may also become resistant.

Anticonvulsant dose is adjusted by starting from a lower dose to reach the state where patient is free from fits. Drugs have to be continued for the whole life. If the brand is changed reappearance of convulsions might occur due to decreased bioavailability. Phenytoin is a drug of low therapeutic index. There exists small difference between toxic and therapeutic effects which must be taken care of.

Chemotherapeutics have low therapeutic index too. Plasma levels of corticosteroids matter as well.

We have to adjust the dose so that therapeutic failure does not occur.

Where, LD50 is a dose which can kill 50% of the animals administered

TD50 is the median toxic dose

ED50* is the median effective dose

Drugs having low therapeutic index include: