Cephalosporins are the derivatives from fungus cephalosporium, cultured near sea.

Classified into four generations depending upon antibacterial spectrum.

Pseudomonas is sensitive only to ceftazidime & Cefoperazone

Most of the 3rd generation drugs are effective against pseudomonas.

Amide group at position 6 contains R, where substitutions are made.

Uses are similar to 3rd gen cephalosporins, differ in structure. 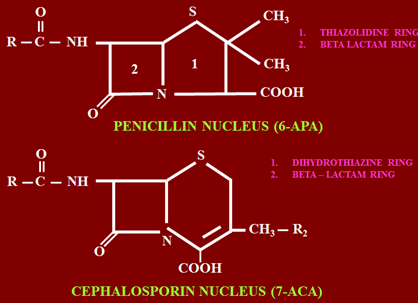 Same as that of penicillins.

Given both parenteral or orally. Mostly parentally as used mainly against resistant infections.

Most of these drugs are excreted unchanged in urine by tubular filtration and secretion.

Ceftriaxone, Cefamandole and Cefoparozone are excreted in feces (bile) thus are safer in patients suffering from renal failure.

Some of these drugs cross BBB, effective in meningitis. Drugs which cross BBB include:

Half life of these drugs ranges between 1-4 hours except Ceftriaxone, which is longer (8.5 hours)

As are quite expensive, they are reserved for infections resistant to penicillin. They should not be used for ordinary infections.

Having extended spectrum, used in:

Cross allergy may occur when using in hypersensitive individuals, care should be taken. Incidence of cross allergy is between 6-18%, as share beta lactam ring with penicillins. Even anaphylactic reaction may occur

Most important adverse drug reaction. Most of these drugs if used for prolonged periods may cause interstitial nephritis as excreted in urine.

Drugs metabolized in liver like Cefoperazone and Ceftriaxone may damage liver.