Drugs in this class differ from all others since they are designed to specifically inhibit or suppress the infecting organism, without producing damage to recipient.

Drugs in this class differ from all others.

History has been divided into certain periods, these include:

The phenomenon of antibiosis was introduced by Pasteur in 1877. He showed growth of anthrax bacilli in urine was inhibited by air borne bacteria.

Prescriber should clearly identify whether there is need of chemotherapy or not, because some infections like sore throat, common cold have viral origin and hence there is no role of antibiotics. They themselves subside in 5-7 days if defense mechanisms are good enough. Symptomatic measures will help.

Selection of drugs is based on cost effectiveness of drug, the safety and toxicity. We have targeted chemotherapy and empirical chemotherapy.

Empirical chemotherapy is based upon clinical practice, the experience of doctor, the epidemiological pattern of disease, extent of disease in community.

We take the specimen for culture but start treatment at the same time. Usually treatment is initiated with narrow spectrum drugs, however, in life threatening situations we start with broad spectrum antibiotics.

Selection of dose should be enough to achieve minimum inhibitory concentration (MIC). It is the

“Minimum concentration of antibiotic required to suppress growth of micro-organisms or to achieve therapeutic effect”.

Route of administration is such that MIC is achieved and the drug reaches the site of action. E.g. aminoglycosides like streptomycin if given orally, it is ineffective (a polar compound).

Drugs which cannot cross BBB can be given by intrathecal route of administration. However nowadays intrathecal administration can produce neurotoxicity so drugs like penicillin in meningitis are given I/V in massive doses. In this way desired concentration is achieved.

Monotherapy is better tolerated. It is cost effective and chances of drug interactions are less.

There are certain conditions where there is no concept of monotherapy, e.g. tuberculosis.

There are a few advantages of drug combinations:

Frequent change of drug is not a good practice. Enough time should be given to a drug so that it get absorbed, reaches the site of action and produces pharmacological effects.

Removal of barriers for site of administration

Sometimes barriers like presence of pus or necrotic tissue can decrease the effectiveness of antibiotics. E.g. drainage of pus makes treatment more effective.

Monitoring of plasma levels of drugs

This monitoring is of drugs where therapeutic index is low. Among antibiotics, it is frequently done with aminoglycosides and with certain cancer chemotherapy drugs.

Prevention of diseases of infections by chemotherapy.

E.g. in patients of rheumatic fever long acting penicillin is drug of choice for preventing recurrences.

In meningococcal meningitis, ceftriaxone or Rifampicin is given during an epidemic. In malaria, person travelling to endemic area with high transmission rate, Mefloquine or Primaquine are given.

Incidence of surgical infection is more where duration of surgery is 2 hours or more (prolonged surgery) or where there is insertion of prosthesis in bones or body cavities.

Carrier state is the continuous presence of micro-organisms like bacteria, viruses or fungi in organisms without infecting that person or producing symptoms, but capable of infecting or transmitting it to other persons.

Classification can be according to:

Classification on basis of Chemical Structure 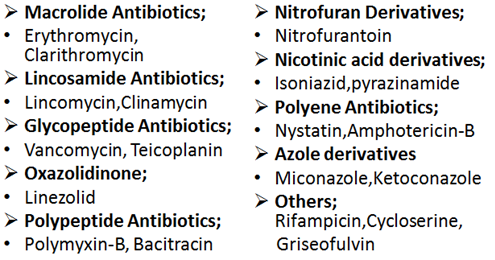 Classification on basis of Mechanism of Action 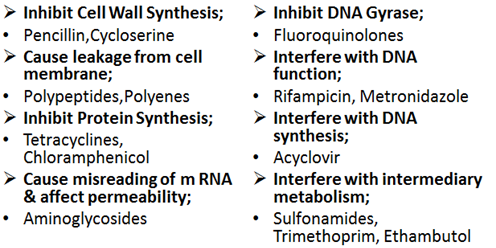 Type of organism against which primarily active

Drugs are effective only against certain specific families of bacteria. e.g. Streptomycin, Erythromycin

Drugs are effective against wide range of disease producing micro-organisms, against both gram positive and negative organisms. E.g. Tetracyclines, Chloramphenicol

Bacteriostatic drugs that only stop the growth of bacteria, not necessarily harming them otherwise.

Upon removal of bacteriostatic drugs, growth of bacteria is resumed. 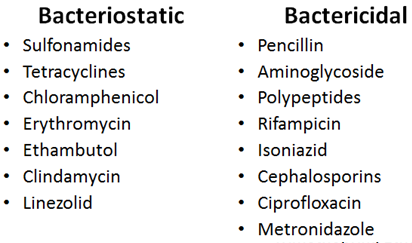 Antibiotics are obtained from

Problems that arise with the use of Anti Microbial Agents

Toxicity is divided into:

Local irritation produced at site of administration e.g. pain and abscess formation by I/M drugs and thrombophlebitis of injected vein by I/V administration.

Almost all antimicrobials produce this toxicity. It is mostly seen with erythromycin, tetracyclines and cephalosporins.

Almost all antimicrobials produce dose related and predictable organ toxicity. E.g. with aminoglycosides ototoxicity and nephrotoxicity is seen, with tetracyclines, renal and hepatic toxicity occurs and with chloramphenicol bone marrow suppression is encountered.

Practically all antimicrobials are capable of producing hypersensitivity reactions, ranging from skin rashes to anaphylactic shock. These might be unpredictable and not related to dose. Usually seen with penicillin and cephalosporins.

Appearance of newer infection as a result of aminoglycosides since these drugs are capable of suppressing flora. It is seen with broad spectrum drugs. Individuals are compromised and situation is difficult to treat.

With prolonged use of antimicrobial agents, vitamin B and vitamin K deficiency can occur. E.g. neomycin aminoglycoside can produce steatorrhoea and malabsorption syndrome.

Aminoglycosides may be sufficient to treat one infection at same time mask another one acquired. One infection is treated at a time, as a result second infection manifests later in more severe form e.g. syphilis is masked by single dose of penicillin that is used to treat gonorrhea.

Drug resistance is the unresponsiveness of micro-organisms to aminoglycosides. It is similar to the phenomenon of tolerance seen in higher organisms. It is basically divided into:

Some microbes have always been resistant to aminoglycosides due to lack of target site on which they act, due to alteration in metabolic processes. E.g.

This type of resistance poses no significance clinically.

Development of resistance due to use of aminoglycosides over a prolonged period of time. This is dependent upon the micro-organisms.

Some bacteria are notorious for rapid acquisition of resistance like Staphylococcus aureus, coliforms and tubercle bacilli.

However, some like Streptococcus pyogenes and Spirochetes have not developed resistance to penicillin though they have been exposed to it for more than 50 years. Thus have slow acquisition of resistance

Drug resistance may be due to mutations and genes transfer.

Stable, heritable genetic change that occurs spontaneously and randomly among micro-organisms and are not induced by antimicrobial agents. Any sensitive population of micro-organisms contain a few mutant cells which require a higher concentration of antimicrobial agents for inhibition. These cells are selectively preserved and get a chance to proliferate once sensitive cells are removed. This mutation may be single step or multiple steps.

It emerges rapidly, confers a high degree of resistance e.g. the resistance to Rifampicin develops in a single step manner.

In this a number of gene modifications are involved. Sensitivity decreases in a stepwise manner. Resistance to erythromycin is developed by this manner.

In gene transfer, infection may be transferred from one organism to another by:

Largely occurs in colon where a large number of gram negative bacilli come into contact. It is a very important mechanism of horizontal transfer of infection.

Resistance properties are usually encoded in extra chromosomal “resistance factor”. Resistance factor is taken up by a phage and transferred to another bacteria. This transfer of resistance carrying gene through an agency of bacteriophage is called transduction.

Infectious bacteria release the gene carrying resistance into a medium from where this is imbibed by another organism.

3.      Altered expression of proteins in drug-resistant organisms
a.      Modification of target sites

Decreased accumulation of antimicrobial agents due to decreased entry or due to efflux pumps. E.g. in gram negative bacilli there is lipopolysaccharide layer that prevents the entry of aminoglycosides.

Presence of efflux pumps which pump the drug out of cells. It is seen with tetracyclines and primaquine.

This is development of tolerance or resistance to toxic substances as a result of exposure to similarly acting substances. It is usually seen with pesticides and antimicrobial agents. E.g. Rifampicin and Refabuten cross react in treatment of tuberculosis. This cross resistance is because they are chemically and mechanistically related.

This cross resistance may be:

Partial cross resistance is usually seen when drugs are unrelated. E.g. seen between chloramphenicol and tetracylines.