Chloroquine is one of the oldest anti-malarial agent, effectively used in malarial infections. P. falciparum and vivax are the sensitive types.

It is a rapidly acting drug, targeting the asexual stage. It is an effective blood schizonticidal agent.

It is gametocidal, except for P. falciparum.

When administered, patient becomes afebrile within 24-48 hours. Use of chloroquine is declining recently due to the fact that most strains have become resistant. The mortality rate has increased along with the spread of malaria.

If after administration, afebrile stage is not achieved within 24-48 hours, it indicates specie is resistant and another drug should be used. There is very high resistance in some regions.

Mechanism of action of chloroquine 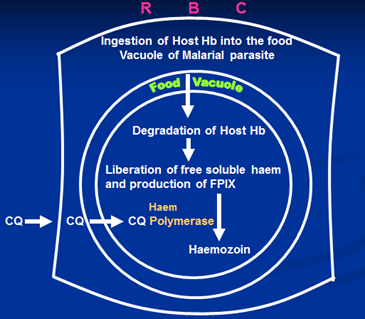 1. Accumulation in food vacuole of the parasite- role of pH gradient (chloroquine trapping)

Affects asexual cycle of plasmodium specie. Once administered, it has to enter site of action. It rapidly enters and gets concentrated in food vacuole, present within erythrocytes.

Plasmodium develops, multiplies and transforms by utilizing hemoglobin of human erythrocytes. It conserves hemoglobin, converting heme rapidly into insoluble and ineffective pigment known as ferri proto porphyrin 9 or Hemozoin, which is non-lethal and non-toxic to plasmodium speices. It has high affinity for chloroquine, which is another mechanism for trapping chloroquine.

Once trapped, chloroquine acts by one of many ways:

a.      Inactivation of heme-polymerase responsible for conversion of heme part of hemoglobin into hemozoin. Conversion does not take place, heme is toxic to plasmodium, resulting in death of plasmodium.
b.      Another way is that it enters and gets intercalated into DNA double helix held by weak hydrogen bonds connected strongly with covalent bonds, thus separation does not take place. Transcription, translation and multiplication is inhibited.
c.       Impairment of metabolic process.
d.      Damage to biological membranes
e.       Inhibit DNA & RNA polymerase

1. Main use is as anti-malarial. Highly effective for blood schizonticides.  Mostly only sensitive for P. falciparum, as most strains are resistant now. Used usually to resolve febrile illness within 24-48 hours, if does not improve, then strain is resistant.
Problem of resistance is seen more commonly in South Asian and African belt. Resistance has developed in Afghanistan and Khyber Pathtunkhua. If we want to avoid relapse, Primaquine is used to eradicate tissue schizontal activity.
2. Previously used for chemoprophylaxis, now due to development of resistance, chloroquine is not used.

Amebic liver abscess (as chloroquine is concentrated in the liver) because:

When administered, absorbed from upper part of small intestine, having activity against Entamoeba histolytica.

Used for long time for rheumatoid arthritis, but because of associated ocular adverse effects, precaution is taken to have eye examination every 4 to 6 month to check retinal changes.

With cholorquine there is emergence of resistance, which has limited its use. Primarily highly effective against febrile illness, relief is quickly achieved within 24 hours. It is easily available, well tolerated and cost effective but now uses are declining because of resistance.

Not capable of converting heme into hemozoin.

6. Less concentration of chloroquine within food vacuole due to:

Well tolerated in therapeutic range (600 mg) in divided doses, with no significant adverse effects. They include:

When chloroquine or hydroxychloroquine are given for long term therapy, retina is examined whether changes have occurred or not.

On this basis chloroquine is contraindicated in patients suffering from:

As these conditions are aggravated.