Derived from Greek word diabainain: to pass through

It is a state of high glucose levels which may lead to complications including:

Patient shows an increase in blood glucose levels due to decreased utilization of glucose, leading to increase in compensatory mechanisms, resulting in increased fat metabolism, leading to formation of ketone bodies (Acetone, Acetoacetic acid, alpha ketobutyric acid). This leads to ketoacidosis and death of patient.

Main symptoms occur when absolute or relative deficiency is seen due to various factors:

To give insulin. Increase in glucose levels occur due to relative deficiency of insulin. The purpose is to increase glucose metabolism and decrease fat metabolism.

Absolute deficiency of insulin due to degeneration of pancreas, usually occurring in young age. It may be due to:

Insulin is required for treatment, so known as IDDM.

Occurs in middle age, relative deficiency of insulin occurs. Although production may be normal but insulin antagonists may be present in blood. It is a less severe disease than type 1. Type II may lead to ketoacidosis. Insulin may not be required for treatment, it is usually due to increased activity of pancreas (overactiivty). Also has genetic basis.

1. Lack of secretion –degradation of beta cells of pancreas

2. Tissues insensitivity to insulin mainly due to excessive secretion from pancreas (esp. type II occurring due to overeating)

4. Depressed release of insulin and transport

Increased blood glucose levels especially after meal is the main stimulus for the release of insulin.

It is mainly synthesized in beta cells of pancreas from pro-insulin, which comes from pre-proinsulin.

It has a molecular weight of 5808. Chemically consists of 2 polypeptide chains:

linked together by disulfide bonds. 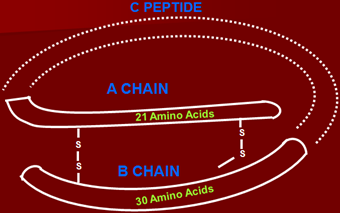 When insulin is released by beta cells on pancreas, it goes to target tissues present mainly in:

If insulin is increased, downregulation of receptors occurs, leading to decrease in receptors.

After insulin release, it binds insulin receptors present on cell membrane of tissues. There are 2 parts of these receptors:

Beta part is a kinase enzyme. When autophosphorylated, it also causes phosphorylation of other cell constituents in cell membrane, ultimately leading to translocation of glucose transporters from storage sites to cell membrane.

When these glucose transporters are transported, they cause increased utilization of glucose.

Polypeptide hormone, thus it cannot be given orally.

Routes Of Administration Of Insulin

Insulins Types: (According To Source)

a)      Bovine differs from human insulin in 3 amino acids.

b)      Porcine differs from human insulin in 1 amino acid

Disadvantage of bovine and porcine form is although having same effect but increased chances of hypersensitivity reactions.

But human insulin is very expensive, so as there is no difference in action, we always use bovine and porcine forms, being cost effective. Human form is resorted to only when patient is not responding or when hypersensitivity reactions are seen.

Bovine and porcine in pure form are mono component, causing less hypersensitivity reactions as compared to older preparations. Human insulin is in pure form, so has no reactions.

Classification (According To Duration Of Action)

Preparations of insulin are available in the form of units. One unit of insulin is defined as:

When blood levels are more than 300mg/dl, start with 20 units of regular short acting insulin.

When there is change in requirement of insulin, e.g.

he may go into hypoglycemia. Due to release of catecholamines, certain symptoms appear:

May cause weight gain of patient

When treatment is not given, breakdown of fats cause diabetic ketoacidosis, which may be serious enough to cause death of patient.

Forms of human insulin (depending on source recombinant DNA technique)

Mostly used for type II diabetes –all are taken 30 minutes before meal.