Drug enters the body by absorption. Inside the body, drugs move in the blood to different parts of the body. Distribution of drugs can be defined as:

“The process by which a drug reversibly leaves the blood stream and enters the interstitium (extracellular fluid) and/or the cells or tissues.”

The drugs are present in free or bound form and different processes or mechanisms affect their distribution. 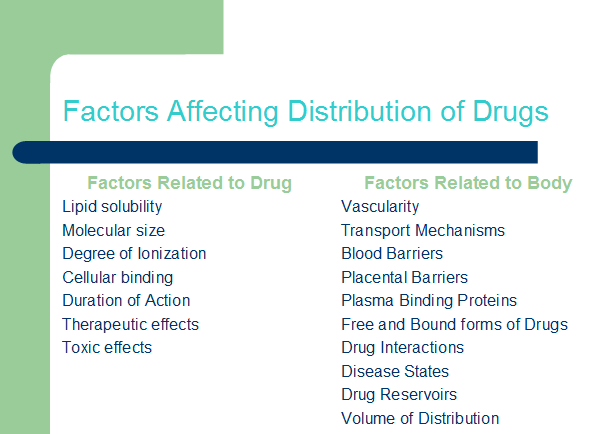 Factors Related to the Drug:

Greater the lipid solubility, more is the distribution and vice versa.

Drugs exist as weak acids or weak bases when being distributed. Drugs are trapped when present in the ionized form, depending upon the pH of the medium. This fact can be used to make the drug concentrated in specific compartments.

Drugs may exist in free or bound form. Bound form of drugs exists as reservoirs. The free and bound forms co-exist in equilibrium. Cellular binding depends on the plasma binding proteins.

Different drugs have different affinity for different cells. All cells do not bind the same drugs.

Bisphosphonate compounds bind with the bone matrix cells and strengthen them. They are used in the treatment of osteoporosis.

Chloroquinine can be deposited in the retina.

Tetracycline can bind the bone material. It may also get bound to the enamel of the teeth.

Factors Related to the Body:

Example includes thiopentone sodium which is used as general anesthetic. When given, it goes to the brain producing its effects. It is then redistributed to the less profused organs. Because of high lipid solubility, it is accumulated in the fatty tissue for longer duration. Thus the clearance of the drug is slow, producing prolonged period of drowsiness (up to 24 hours).

Different drugs are taken up by different compartments of the body differently. Lipid soluble drug move by passive transport which is non specific. Active transport occurs only where carrier proteins are present.

Different blood barriers exist. Blood brain barrier is present because of the delicacy of nervous tissue to avoid chemical insult to the brain.

Certain efflux pumps or transporters exist through which drug can be effluxed as well. Example includes p-glycoprotein.

Trophoblastic tissue separates maternal blood from fetal blood. Different transporters are present. Efflux transporters cause efflux back of the drugs from the fetus to the mother.

Many proteins exist in the plasma. Plasma binding proteins include:

Albumin is the most abundant plasma protein. It has higher affinity for acidic drugs but the capacity is low. Only two sites are present for binding drug molecules.

However, albumin can bind a large number of basic drugs but has lower attractive forces. Its capacity for binding basic drugs is more but the affinity is less.

Alpha glycoproteins mainly bind basic drugs. Their levels are increased during stress, trauma and surgery. It is during these times that their more amounts are required.

6. Free and Bound Forms of Drugs

When drug enters the body, it exists in:

These two forms have certain effects on the pharmacokinetics and pharmacodynamics. Free forms are metabolized and excreted because they can cross the glomerular membrane. Free forms of drugs are therapeutically active.

Bound forms of drugs act as a reservoir. They are not metabolized or excreted and do not have therapeutic or toxic effect. When the free form is used up, drug is released from the reservoirs. Thus both forms exist in equilibrium.

If a number of drugs are simultaneously given, or drugs interact with endogenous substances, one drug can be displaced by another.

Example includes interaction of sulphonamide with bilirubin, with the result that bilirubin is displaced which may cause kernicterus in babies.

Drug interactions occur if both drugs bind to same protein and depend on:

Higher the affinity of the drug, more easily can it displace the other drug.

This phenomenon might be of consequence in the following situations:

a. Volume of Distribution:

Toxic effects are produced when more drug is present in free form than usual.

Different diseases affect the distribution of drugs. Renal diseases cause hypoalbuminemia. Due to less proteins, toxic levels of free drugs may be present. Uremic by-products are also produced which compete with drugs.

Hepatic diseases cause decreased synthesis of proteins causing hypoalbuminemia. Free drugs may be present in toxic levels and bilirubin by products increase as well.

Thus drug, whose doses have to be adjusted to produced desired effects (may be reduced even to half).

Drugs are stored and are released slowly which affects their pharmacokinetics and pharmacodynamics. Drug reservoirs include:

The apparent or hypothetical volume in the body into which a drug distributes.

First of all the drug enters the plasma which is approximately 4 liters. Heparin is a large molecular drug, it does not cross blood vessel lining, thus volume of distribution is less.

Gentamicin, an antibiotic leaves the plasma to enter the interstitial fluid, its volume of distribution is approximately 14 liters.

Some drugs like ethanol pass from the interstitial fluid to the intracellular fluid and enter the fluid of the cells, thus have the volume of fluid approximately 42 liters.

We cannot measure the volume of distribution beyond the intracellular fluid. Drug does not stay here but binds cell membranes, enzymes, nuclear proteins and transporting proteins. All of this volume cannot be measured by any means.

Thus we say that the volume of distribution is the apparent volume. Each drug has different plasma binding and cellular binding values.

Volume of distribution can be calculated as:

Where D is the dose while C is the concentration. Dose is the total amount of drug being given while concentration is found from the plasma.

Half life is prolonged when drug stays for a longer duration in different compartments. Chloroquinine has a half life of 45 days, while that of gold is 1 year. Thus the duration of action is prolonged.

The movement of drug from more perfused organs to less perfused organs is known as redistribution of drugs. Initially the heart, liver, kidneys, brain and other highly perfused organs receive most of the drug, during the first few minutes after absorption.