Rhythmicity means that impulses are generated at regular intervals. The regular pattern in SA node is about 70/min, while that of AV node is 45/min. Purkinje fibers beat at rate of about 25/min. Any change in rhythmicity leads to cardiac arrhythmias.

Excitability means the development of action potential in the heart. This is discussed in four phases: 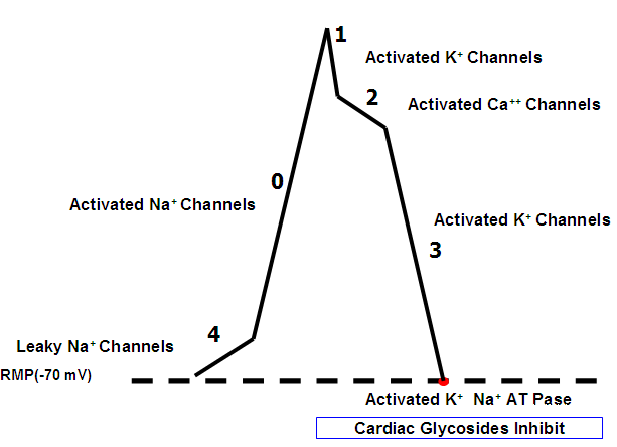 Phase 0   Rapid influx of Na+ leads to depolarization. Normal resting potential is -70 mV. During phase 0 it rises to +30 mV.

Phase 1   Initial period of rapid re-polarization due to outflux of K+. Action potential changes from +30 to +10 mV.

Phase 2   The plateau phase. The delay in repolarization is due to the opening of voltage gated Ca++ channels. During this phase the action potential changes from +10 to -10 mV.

Ca++ channel blockers are used in the treatment of cardiac arrhythmias, which involve the activation of contractile machinery of heart due to the opening of Ca++ channels (SA and AV nodes are involved).

After phase 3, full repolarization occurs. Na+ K+ ATPase is activated, which is responsible for bringing the ionic concentration back to normal (outflow of Na+ and inflow of K+).

Phase 4   No absolute inhibition of Na+ channels has occurs. Some inflow continues, once the potential reaches threshold, the cycle starts once again.

Most drugs act by blocking the various phases.

Once action potential is generated, it is conducted to other parts of the heart. From SA node it travels to the atria, the AV node, the ventricles through the bundle of HIS (purkinje fibers). The conduction velocity is low in the atria (5 cm/sec) while it is very high in the ventricles (200 cm/sec).

Contractility is the vigor of heart by which it pushes the blood into the systemic blood vessels. It is responsible for the development of cardiac output and maintenance of heart rate.

When decrease in contractility occurs due to weakness of cardiac muscles or due to cardiac failure, the cardiac output decreases, as well as the heart rate.