When drugs are taken in, they should be eliminated as well, as we do not want their action to continue indefinitely. If they remain in the body, they might produce undesirable results. Excretion and clearance are two separate terms but are closely linked together.

Drugs can be excreted in two forms:

The primary role of biotransformation is to convert lipophilic drugs into hydrophobic compounds or to convert non-excretable drugs into excretable forms. Being lipophilic is a property desirable for absorption and passage through the body, but not for excretion.

Kidneys are not fully developed in newborns. They mature in the first few weeks and attain normalcy. Throughout the adult life, 1% decline per year in kidney functions occurs. Therefore, in almost all the elderly, some renal impairment has occurred. While prescribing drugs, one needs to be extra careful in the extremes of ages.

There are three important processes in urine formation; filtration, tubular secretion and tubular reabsorption. If a disease process occurs resulting in renal impairment, all these three processes are affected.

The basement membrane and capillaries have a special structure with pores and fenestrations to make the filtration rather easy. Certain factors influence the filtration. These include:

Still some drugs are freely filtered. These include a group of antibiotics known as amino glycosides (gentamicin)

Tubular reabsorption is quantitatively much more important than tubular secretion. It is mainly a passive process in which simple diffusion takes place. Some active transport at distal convoluted tubules occurs as well. Simple diffusion is dependent on concentration gradient. This gradient is created by the salt and water being reabsorbed continuously. This leads to an increase in concentration of drugs present in the lumen of renal tubules. Although the process is passive, it can be interfered by ionization of drugs. Ionized drugs will not diffuse passively. Ionized drugs are surrounded by water molecules, which increase their size, impeding their passage through the semi-permeable membrane.

Lipid soluble drugs when taken orally and converted to polar molecules, they have reabsorption impeded by ionization in the renal tubules. Drugs which are acids or bases can be manipulated for desired results. According to Henderson-Hasselbalch equation, if urine is made alkaline, more acid will be ionized, while in for basic drugs, medium can be made acidic to impede reabsorption and to increase secretion in the urine.

This fact is made use of in cases of poisoning. In cases of aspirin poisoning, which is an acidic drug, only available option is to make the urine alkaline (by bicarbonates). Thus the drug is ionized and not absorbed. For basic drugs, ammonium chloride and ascorbic acid may be given for making the medium more acidic. Giving these compounds only once will not change the pH indefinitely. Instead, they are given repeatedly as long as the required time

Similar to acids, the process for bases occurs in S1 and S2 for which several transporters are found. Procainamide, an antiarrhythmic uses this process for elimination.

As secretion is an active process, it has certain attributes:

Some diuretics are actively secreted by tubular secretion in S2. Uric acid, an inherent substance, is also secreted by this. Due to this, competition occurs and secretion of uric acid is impaired. Individuals predisposed to gout may develop the disease because of hyperuricemia. This is why serum uric acid levels are checked and proper history is taken for gout.

Another example is of penicillin 90% of which uses tubular secretion. Probenecid was used in combination with penicillin, at the time in history when penicillin was rare and expensive. This drug helped to reduce the dose of penicillin. Now as penicillin is widely available, this drug is not used any more.

Liver is the major site for metabolism. It converts lipophilic compounds into hydrophilic compounds by phase I and II reactions, which makes the drugs more excretable. In membranes of canaliculi, transporters for active secretion of drugs or metabolites are present as well. Thus the process of elimination in liver takes two forms: 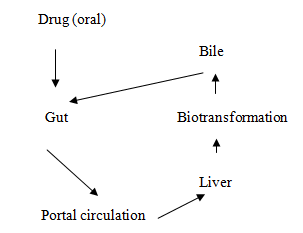 In certain situations, lower portion of gut bacteria produce glucuronidases, which split conjugated drugs and are reabsorbed. This prolongs the duration of action of drugs unusually. When drugs are being taken along with antibiotics like tetracyclines or ampicillin, the antibiotics destroy these gut bacteria. Drugs like oral contraceptives, which are steroids and have known enterohepatic circulation, have shortened duration of action. Therapeutic failure might result.

Lungs constitute the most different route of drug elimination. This is the only route by which lipophilic drugs are excreted because they are absorbed through the alveolar membrane. Examples include general anesthetics, which are gases pumped through the endotracheal tubes and diffuse across the alveolar membrane. When stop their administration, pure oxygen is supplied. The body acts as a reservoir and transport occurs in reverse. Thus lipophilic compounds are lost through the lungs. Alcohol breadth is another example which can be tested by alcohol breath test, by which alcohol in the excreted air is measured.

Drugs are mostly absorbed in the small intestine. Anthracene purgatives, which act mainly on the large bowel, are partly excreted in to that area from the blood stream after absorption from small intestine. Heavy metals are also excreted through the intestine and can produce intestinal ulcerations.

Breast milk is important because many drugs are excreted in it. Some effects of the drugs may be transferred to the baby, which may prove harmful. It is important to know which drugs are not to be used during breast feeding. Milk being slightly acidic than plasma, weak bases get ionized and have equal or higher concentration in milk than in plasma. Non electrolytes like ethanol and urea readily enter the milk independent of pH.  70% of plasma concentration of tetracyclines may enter milk, prolonged usage of which might cause permanent staining of teeth and weak bones in the baby. Ampicillin may lead to diarrhea and allergic sensitizations. Chloramphenicol might lead to aplastic anemia in baby, bone marrow suppression and grey syndrome. Morphine, opoids and smoking may cause lethargic baby.

If the mother is taking drugs, she should lactate the baby a few hours after taking drugs or most preferably half an hour before intake.

Following drugs given to mother appear in milk to effect the infant adversely:

Other sources include tears, saliva and other body secretions. These are not quantitatively important. Examples include:

The patient should be educated about these changes.