–  produce a REVERSIBLE loss of sensation …

–  when applied directly onto nerve tissues or mucous membranes

Local anesthetics are ‘local’ ONLY because of how they are administered!     (Selectivity)

Local anesthetics are the agents used to bring about local effects by targeting specific restricted areas. The effects can be easily reversed.

Administered by topical application or injection into superficial region, where they cause loss of sensations. Mostly sensory and pain sensations are lost first, followed by others. at times motor activity is also affected.

Local anesthetics are usually designed in a way that effects are reversible and do not cause damage to underlying cells or tissue.

The first clinically used local anesthetic cocaine. It is a natural alkaloid from Erythroxylon coca. It was discovered in 1860 and was used till 1884. Later on it was discovered that it had high addictive potential, so labelled drug of abuse and discontinued. Others have been discovered with less abuse potential like procaine, procainamide. Lidocaine is the latest drug or lignocaine as generally known (synthetic local anesthetic considered prototype).

Properties Desirable in a Local Anesthetic

1. Non-irritating if applied topically or on mucous membranes

2. Does not cause permanent damage to nerve structure

3. Systemic toxicity should be low

5. Onset of action as quick as possible

Classification According To Chemistry

According to Duration of action

Classification According to Clinical Uses

Most local anesthetics consist of 3 parts:

Intermediate alkyl chains are either esters or amides.

Two types of linkages give rise to 2 chemical classes of local anesthetics.

Local anesthetics which consist of ester type of side chains are:

Local anesthetics which consist of amide type of linkage are:

Local anesthetics are mostly available for therapeutic application as salts, and are said to be weak bases, with pKa 8-9.

To bring about the effects, they are required to penetrate through membranes, thus lipid solubility is necessary.

Non-ionized form is important to penetrate through membranes to reach exoplasm. Once reaches the exoplasm, it changes to catoinic form, which binds local anesthetic receptors.

When pH of area i slow, local anesthetic (as is weak base) cannot penetrate through membrane, hence effects are not produced.

· Diffusion into the nerve fiber

In neurons, excitable membranes have more Na+ outside in resting stage while K+ inside. Potential is -60 to -90 mV. Movement of ions is possible, energy for which is supplied by Na K ATPase pump.

When impulse conduction takes place, threshold is reached, opening of Na channels occurs, with movement of Na ions down the concentration gradient. With this movement, potential reaches +40 mV, known as depolarization.

Closing of Na channels and opening of K channels, leads to K efflux and beginning of repolarization.

When action potential moves along the entire length of nerves, impulse conduction occurs. 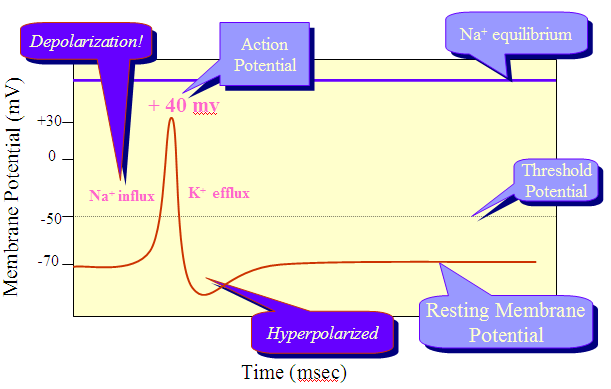 Local anesthetics act by targeting the Na channels, which are transmembrane structures with one end towards outside (M gate or Na activation gate), other towards inside (H gate or inactivation gate).

M gate is usually closed in resting state, opens with threshold and Na ions transverse through Na channels, leading to depolarization. After a few msec close, and further movement does not occur.

If local anesthetic is given in non-ionizable, non-polar form, it transverses through membrane, within exoplasm cationic form binds local anesthetic receptor site, which is present on inner side.

Channels are closed in inactivated state, thus action potential is slowed down, and eventually inhibited. 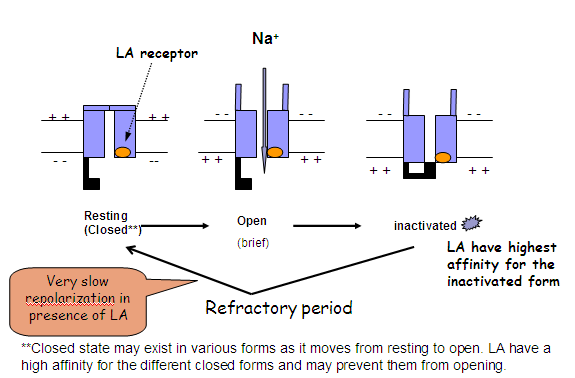 1.        The threshold for excitation increases

5.        Finally the ability to generate an Action Potential is abolished

Smaller fibers are blocked first, then larger ones. Thus less time is required in smaller fibers.

Rapidly firing neurons are blocked first, as have more affinity for local anesthetics.

Exception is in mixed type of nerve trunks especially within extremities where motor fibers are present towards periphery with sensory towards inner core, thus motor are blocked first.

Absorption of some local anesthetics depend on:

To achieve this, local anesthetic is mostly combined with vasoconstrictor, most commonly adrenaline is used, epinephrine, phenyl ephrine may be used as well.

Clonidine (central alpha 2 agonist) is being utilized in experiments for combining it with local anesthetics to augment their effects.

Biotransformation of most esters and amides is based on chemical structure.

Most serious, if given in low doses, most effects are avoided. Low blood levels reduce the occurrence of toxicities.

Stimulation is due to inhibition of inhibitory pathways.

Later on excitatory pathways are also inhibited, leading to wider range of effects including:

Within cauda equine can cause local neurotoxicity, usually between L2-L3 mostly when given by spinal anesthesia.

a.       Depressant effect by acting on cardiac Na channels. Later on in high doses, Ca channels are also inhibited.

Cocaine is an exception as is a potent vasoconstrictor, hypertension, tachycardia and arrhythmias occur. Norepinephrine from synaptic cleft is not reuptaken and accumulates, producing cardiac stimulatory effects.

Bupivacaine is highly cardio toxic, and is selective for cardiac sodium channels. If administered, cardiac toxicity is seen.

This can be countered by giving atropine to correct heart block.

Levobupivacaine is an isomer of bupivacaine and is said to be less cardio toxic.

Another agent, rupivacaine is said to be more safer in the setting where we want to avoid cardiac toxicity or in underlying cardiac disease. They have even lesser affinity for cardiac sodium channels.

ANS is highly sensitive to effects of local anesthetics, most nerves are affected in dose priority. They inhibit nerves to blood vessels and heart, producing hypotensive effects.

If severe hypotension occurs, foot ends of bed are raised and sympathomimetics are given  (ephedrine).

Motor paralysis is last to occur. Inhibition of motor activity is undesirable. It is usually seen when spinal or epidural anesthesia is administered. It is also the first to recover during recovery.

Seen if given in very high doses.

Prilocaine if given in higher doses, can convert hemoglobin into met hemoglobin, producing cyanosis and chocolate brown coloured blood.

To treat, I/V reducing agent such as methylene blue, ascorbic acid should be administered, which converts met hemoglobin to hemoglobin.

This is seen due to metabolite produced by high toxic levels known as o-toluidine.

Seen with ester type, as rapidly metabolized and converted into PABA, which is more prone to cause hypersensitivity reactions. Rarely seen with amide type of local anesthetics.

2.      Caution in presence of liver/myocardial damage.

6.      Observe the face for any twitching, excitement, and pulse for tachycardia.

8.      Avoid food intake at least 04 hrs. prior to anesthesia to prevent vomiting.

·         Medical use limited to surface or topical anesthesia

·         A toxic action on heart may induce rapid and lethal cardiac failure.

·         A marked pyrexia is associated with cocaine overdose.

·         Available in many OTC preps for relief of pain and irritation

·         Good alternative for those allergic to ester type

·         More potent than procaine but about equal toxicity

·         Slower onset and one of the longer duration agents

·         has been popular drug for analgesia during labor

Cocaine is also used for topical application, mainly in ear, nose and mouth. It is highly vasoconstrictor (may cause ischemia). Typical vasoconstrictors have quick onset and duration of  action of 35-40 minutes. Certain preparations like EMLA cream combination having lidocaine 2.5%, prilocaine 2.5% each, are applied on skin to produce effects as deep as 5 mm. thus local anesthetic effect is produced.

*    Direct injection into tissues to reach nerve branches and terminals.

This type involves skin region as deep as intraabdominal tissue

§ Most Local Anesthetics are used

*    Interruption of nerve conduction upon injection into the region of nerve plexus or trunk.

*    Less anesthetic needed than for infiltration

Given within specific nerve area such as brachial plexus, within intercostal nerves abdominal nerves are targeted, cervical plexus when neck region is targeted.

§ Most Local anesthetics are used

*    Injection into subarachnoid space below level of L2 vertebra (usually between L2-L3 or L3-L4) to produce effect in spinal roots and spinal cord.

*    Use two types of local anesthesias, when dissolved in water: hyperbaric or hypobaric solutions depending on area of blockade.

Usually selected when lower part of body is targeted e.g. pelvic region. Administration of local anesthetic into epidural space or near dura matter where nearly most nerves pass closely, area supplied by these nerves are targeted.

–  Injection into epidural space usually at lumbar or sacral levels.

–  Unwanted effects similar to that of spinal.

Spinal and epidural anesthesias have complications:

If  headache does develop, we manage it by technique of blood patch. Patient’s own blood is applied to site of injection. Clotting takes place, seepage is inhibited or restricted, headache can be treated.

Browse all articles on Drugs acting on Central Nervous System