Macromolecules protein in nature which are target sites for drugs. Most drugs have to bind receptors to produce effects. Receptors are located mostly on the cell membrane but certain intracellular receptors are found as well.

There are three forms of binding to receptors:

Ligands are the endogenous substances, molecules or compounds which bind with receptors present in the body e.g. acetyl choline, adrenaline, noradrenalin, neurotransmitters like glutamate, aspartate and GABA. They produce various effects and interfere with the flow of ions through channels called ligand gated channels. Their action may:

Agonists are the drugs which when bind receptors, cause activation of receptors. They have the capacity to produce chain reactions in the receptors which ultimately bring about the effects. Agonists have two properties:

Transduction process between occupancy of the receptor by agonist and response to occur is called coupling. Most agonists when bind to receptors cause activation. Most of them alter the second messenger systems in the cells.

There are three second messenger systems:

The levels of these second messenger systems may increase or decrease. This may occur in three steps: 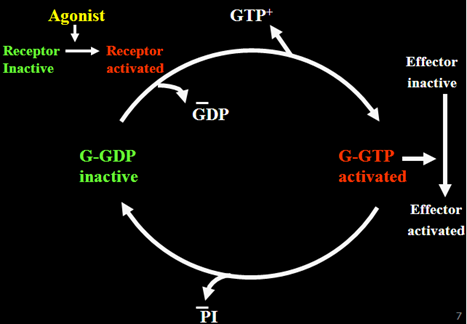 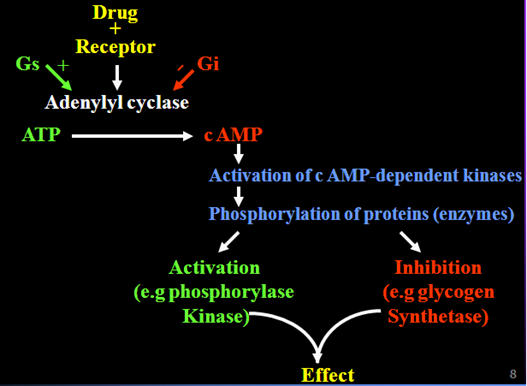 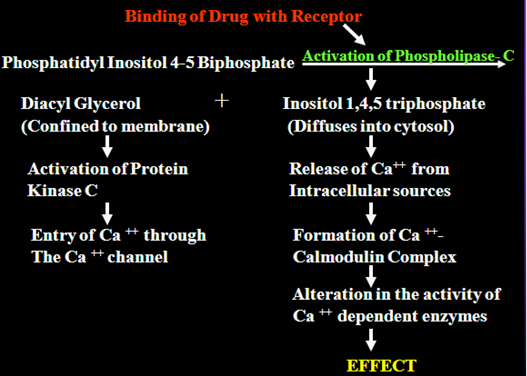 Mechanism of Action of Nitrates 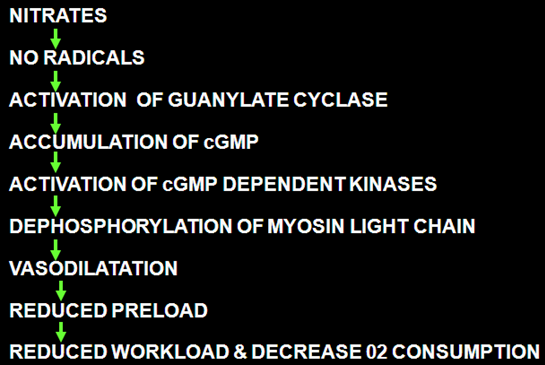 There are four main types of receptors:

When drug binds the receptor, activation occurs, and the response gradually increases until it reaches the peak, then the response decreases, although agonist still binds. This is due to desensitization of receptors, which might be overcome by removing the agonists from the receptor. Example includes suxamethonium (succinyl choline), which produces relaxation of skeletal muscles by:

The reason for desensitization is not clear. In beta blockers (which act by cAMP), ultimately phosphorylation of proteins and accumulation of phosphosilines occurs, which increases the binding of beta receptors with proteins, known as beta arrestin. This beta arrestin interferes with the activity, ultimately leading to inhibition of adenyl cyclase enzyme.

The binding of drug with receptor may by of two types:

In reversible binding, the bond between the drug and receptor is very weak ionic, hydrogen or van der wall. This the effect is short lived.

In irreversible binding, very strong covalent bonds are present, which prolongs the effects of drug. The effect continues until the drug is excreted or new receptor is generated.

Prolong contact of tissues with the agonists results in decreased number of receptors in the tissues called down regulation of receptors. Example includes the patients suffering from bronchial asthma, in whom by prolong usage of beta agonists down regulation occurs. This the effect is reduced.

Sometimes it is seen, especially in isolated tissues, that when various amounts of drugs are added e.g. when in intestines of rabbits acetyl choline is added, this may lead to maximum effect. Only one percent of receptors might be occupied but maximum response might be seen. This is due to the vast reserve. There are spare receptors, only very small amounts of drugs are required for maximum effect.

Binding of drug with receptor is the same. Most of the drugs binding receptors resemble the agonists but they cannot activate the receptors, and also prevent agonist binding. Thus opposite effect occurs in case of agonists and antagonists. They have two properties:

The binding of antagonist with receptor is of two types:

Prolonged contact of tissues with the antagonists results in up regulation of receptors or increase in the number of receptors in the tissues. Example includes patients suffering from arrhythmias or angina taking beta blockers, if we abruptly withdraw them, there will be reversing of the arrhythmia and angina. Up regulation of catecholamines occurs which worsens the conditions.

Partial antagonists have intermediate levels of efficacy. They bind with the receptors but have very small intrinsic activity and efficacy. It can be seen that even on 100 percent occupation of the receptors, the response is sub maximal. Examples include beta blockers like pindolol and oxpranolol. They have ISA property (intrinsic sympathomimetic property) and are used in patients suffering from diabetes mellitus, peripheral vascular diseases and bronchial asthma.

When inverse agonists bind receptors, they cause activation of receptors but produce effect opposite to the agonists. Examples include benzodiazepines used as sedative hypnotics. They produce sedation, relieve anxiety and relaxation of muscles. When beta carbolines are administered, they bind benzodiazepines receptors causing the activation of receptors, producing stimulation, increase in tone, anxiety and convulsions.

Drugs having agonist effect at receptors have positive efficacy.

Drugs having inverse agonist effect at receptors have negative efficacy.

Drugs having antagonist effect at receptors have zero efficacy.