There has been purposeful effort to differentiate these from glucocorticoids, as glucocorticoids are the ultimate answer but with huge side effects, as each and every cell is affected.

These drugs are differentiated because they are also anti-inflammatory, but lack some of the side effects of glucocorticoids.

They are also anti-pyretic, also known as non-narcotic analgesics, due to the fact that dependence may occur with other analgesics.

They are also known as aspirin like drugs, as aspirin is the first drug in the group discovered.

Aspirin was the first drug discovered. Willow tree bark was used for pain relieving effect from the time of Hippocrates, but in 1753 a British clergyman, Raven Admin Steve first wrote about powdered form of bark of Willow tree used for pain, fever and arthritic pain.

Salicylic acid is irritant and difficult to take orally. Hoffmann, a German in 1899, manufactured acetyl salicylic acid (aspirin –a from acetyl and spiria is a plant). Ever since it is being used continuously. Newer uses are being discovered every few years, thus“aspirin a hundred years young”. Every new drug discovered is compared with aspirin.

Classification is based on the mechanism of action. It is known that this group inhibits cyclo-oxygenase enzyme. There are three isoforms:

Under influence of prostaglandins, prostacyclines and thromboxanes (most powerful substance to cause platelet aggregation, which is the first step in injury to micro vessels to control bleeding).

Helps in formation of prostaglandins and prostacyclines, which:

Not present in active form but in inducible form. There are two places where it is constitutive (brain and kidneys). Otherwise induced by

COX-2 is responsible mainly for inflammation.

Only present within brain.

Classification is based on inhibition of COX, either non-selectively or selectively.

Drugs are chemically different, but have the same mechanism of action.

Inflammation is the response of vascular and supporting tissue to injury. There are three phases:

Increased permeability leads to outpouring from vessels, leading to edema and release of various mediators:

In an effort to control foreign body (offending agent) to wall it off.

Neutrophils and lymphocytes try to control the infection, if controlled inflammation is over.

Whenever disruption of cell membrane occurs, phospholipids are exposed, which are acted upon by phospholipase A2. This converts them to arachidonic acid, which can be processed by:

Had this been the only mechanism, anti-inflammatory effect would be incomplete. Inside into other mechanisms is rather patchy.

Hypothalamus controls temperature in the body. There are two areas: 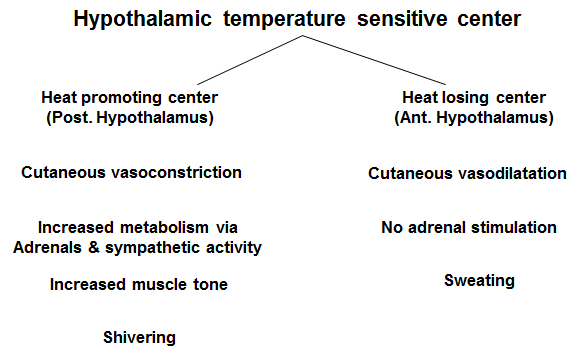 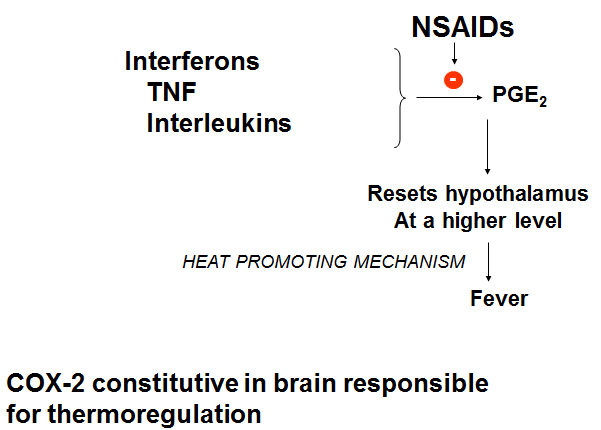 NSAIDS block the production of prostaglandins, which are responsible for resetting the hypothalamus at a higher level. Thus they reset the hypothalamus back to normal, promoting heat losing mechanisms. 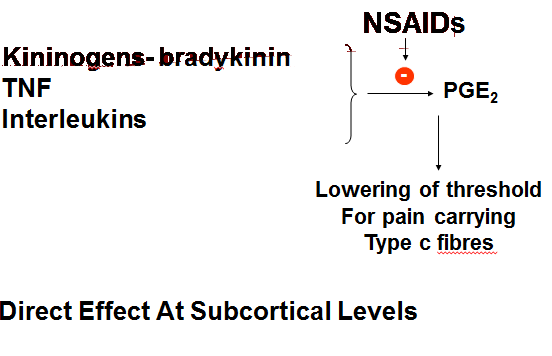 Helpful in controlling mild to moderate pain including

Severe pain is controlled by opioids

All members do have anti-pyretic actions. Few are used including:

Painful menstruation is due to prostaglandin production, which can be inhibited by this group.

Stomach has important protective mechanism controlled by prostaglandins and prostacyclines:

Wide range of symptoms occur which used chronically including:

Can prolong gestation, especially in last trimester of pregnancy. At time of parturition, there is role of prostaglandins, prostacyclines, as their production is blocked, so there is no parturition.

in normal role of PG is not that important, but in certain conditions, like chronic renal failure, cirrhosis of liver, CCF, when blood flow is compromised, PG play important role in auto regulation of renal blood flow.

As PG are inhibited, result is worsening of renal functions.

Thromboxane A2 is inhibited by COX, so aggregation does not take place. This is made use of in the use of low dose aspirin in ischemic heart disease. This can promote bleeding (e.g. from stomach ulcers). Here the side effect is used as therapeutic use.

Arachidonic acid has two pathways. When COX is inhibited, lipo-oxygenases and leukotrines are responsible for allergic reactions.