Phasic pain is produced by the presence of a noxious stimulus

It is superficial pain and involves skin Produces intense sharp sensation. It is transmitted through, fast conducting myelinated A-delta fibers

Tonic pain is evoked by tissue damage occurring in the skin or in the viscera, gradual onset than phasic pain, dull throbbing aching pain. It is conducted through the unmyelinated slow conducting C-fiber pathways.

Nociceptors: are specialized sensory nerve endings, which when stimulated may lead to the sensation of pain

Pain may be of visceral or somatic type:

Visceral pain arises from viscera is dull and less localized. It is treated by opioid analgesic

Somatic pain arises from musculoskeletal organs, skin and muscle, it is localized & sharp & is treated by NSAIDS

Opioids act at CNS and alter the patient’s perception. They are used in severe types of pain. They alter perception, intensity and have emotional effects as well. They are obtained from natural source, opium poppy.

Opium has two series of alkaloids:

Opioid drugs mimic the actions of 03 peptide families in the brain, known as: 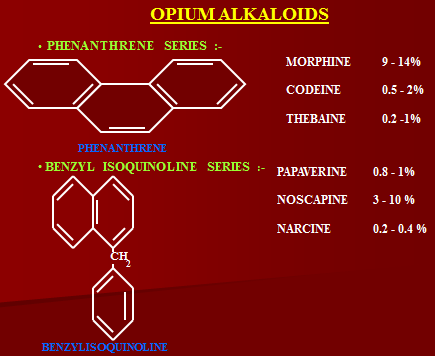 Papaverine is a vasodilator

Noscapine is cough suppressant and does not has analgesic property.

These are responsible for pharmacological actions of morphine.

Morphine is the prototype agonist.

2. Eye
Miosis by a direct action in the brain nucleus of the oculomotor nerve (edinger-westphal). Classic pinpoint pupil is important diagnostically.

– Morphine has no effect at therapeutic doses. Large doses cause hypotension bradycardia.(because of histamine and vagal stimulation)

Not administered to those with head injury because of CO2 retention.

Morphine increases the resting tone of the smooth muscle of the entire GI tract.

Spasm of the smooth muscle of the biliary tract increases pressure, which may lead to biliary colic. Other drugs are used in biliary colic due to increased tone of sphincter of Odii and increase in pressure

In elderly, increase in tone and spasm of the smooth muscle. This can lead to urinary retention.

Hyperglycemia is due to central sympathetic stimulation in increased doses.

Morphine releases histamine from mast-cell causing urticaria, sweating and vasodilatation. May lead to bronchoconstriction as well.

In over dosage, there is always subnormal temperature, due to:

In cardiac and asthmatic patients.

Diphenoxylate is given with atropine, not as anti-spasmodic, but in small quantity to prevent abuse liability.

However, opioid analgesics are not used in bacterial diarrhoea, because diphenoxylate decrease GI mobility, stopping diarrhoea but increasing the absorption of toxins.

Morphine given along with furosemides and oxygen.

Main problem is development of tolerance and dependence. Tolerance does not develop in therapeutic dose, but only when withdrawn abruptly. Reason being adaptive changes at cellular levels.

Morphine and hydromorphine are given orally or parentally, rectal suppositories are also available.

Respiratory depression is the most serious complication of opioids, mediated through mu receptors, antagonized by naloxone 2-4 mg I/V.

Oral route is not preferred. Subcutaneous or I/V mostly used.

Avoided as routine analgesic. Immediate tolerance develops to CNS actions, some to bradycardia, but some actions do not develop tolerance:

Dose has to be increased against tolerance.