Oncogenesis and Oncogenes -Role of RB gene and p53

Oncogenesis, the pathogenesis of neoplasm, involves either gene itself or a product, i.e. protein.

Oncogenes are the genes that control autonomous cell growth in cancer cells. Oncogenes arise from proto-oncogenes.

A proto-oncogene is a normal gene that can become an oncogene due to mutations.

These check points are under genetic control.

Gate keeper genes are the group of gees that prevent cell cycle progression till DNA damage is repaired. Any alteration in gene leads to tumor formation.

In hypophosphorylated state, RB is active and acts as tumor suppressor by inhibiting cell cycle progression.

When it is time for cell to enter S phase, complexes of CDK  and cyclins phosphorylate Rb, inhibiting its activity. Molecular brakes from cell cycle are released. 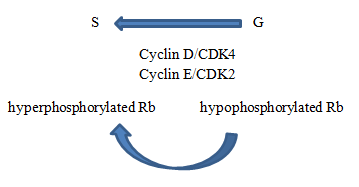 Due to RB gene mutations, brakes on cell cycle are released and cell moves through cell cycle.

The targets of RB genes are the E2F group of transcription factors, released E2F prompts cell to enter S phase.

Pocket domain of retinoblastoma (RB) tumor suppressor is central to Rb function, mutations are found in this localized area.

Deletion or inactivation of RB gene plays an essential role in:

RB inactivation is also found in other tumors, including:

Predisposing conditions may be inherited or acquired. 2nd hit after birth (radiations, viruses) leads to the formation of mutated RB gene, as in retinoblastoma.

Inactivation of Rb protein by binding with viral protein

This gene assists in DNA repair. It acts as a transcription factor.

Cells with unrepairable DNA are directed to apoptosis by p53 gene.

Inactivation of p53 by binding with Viral Proteins

Over half of human malignant cells show mutated p53 gene.

Most common examples are of:

Tumors that retain normal p53 are more likely to respond to such therapy as: