The purine ring is assembled on ribose phosphate; the committed step being the formation of 5-phosphoribosylamine from 5-phosphoribosylpyrophosphate (PRPP) and glutamine by the enzyme PRPP amidotransferase (PRPP-AT). The enzyme PRPP-AT is subjected to negative feedback control by inosine monophosphate (IMP), guanosine monophosphate (GMP) and AMP, and is stimulated by PRPP (IMP, AMP and GMP also inhibit PRPP synthetase). After a number of intermediate reactions, which utilize adenosine triphosphate (ATP), IMP is formed. GMP and AMP are formed from IMP.

In addition to this de novo synthesis, free purine bases are also formed by degradation of nucleic acids and nucleotides; and purine nucleotides can be synthesized from these bases by a salvage pathway involving two enzyme: hypoxanthine-guanine phosphoribosyl transferase (HGPRT) and adenine phosphoribosyl transferase ((APRT). HGPRT synthesize IMP and GMP from guanine and hypoxanthine and APRT synthesizes AMP from adenine. These two pathways do not require ATP and thus there is an energy saving compared with de novo synthesis (PRPP to IMP utilizes four molecules of ATP). 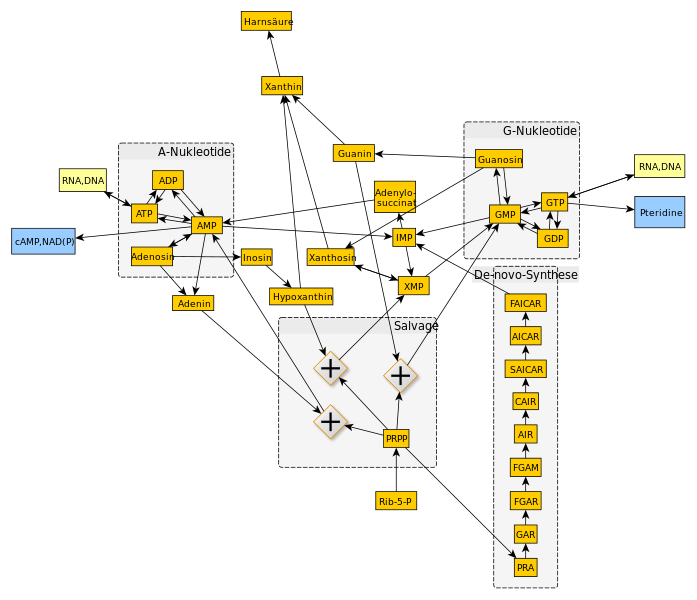 Around 25-30% produced daily is eliminated via the gastrointestinal tract, where it is degraded by bacterial uricases. The remainder is excreted by the kidney. In renal failure the intestinal excretion can be markedly increased.