Vomiting center is located in the lateral reticular formation of medulla (M1, H1, 5HT3, NK1 and others are involved). Stimulus comes from different areas. Efferents move through vagus nerve.

Once stimulated, efferents move through the vagus, phrenic and spinal innervation of abdominal muscles. 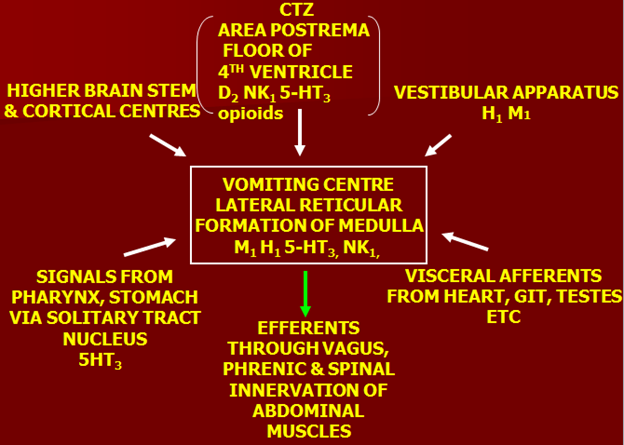 Events in the process of emesis

Used because of prokinetic effect, given 30 minutes before meal. Also used adjunct to proton pump inhibitors and H2 blockers.

Used in combination in delayed type chemotherapy induced nausea, vomiting along with other drugs

Uses in persistent type of hiccups

Having both central and peripheral effects, only D2 blocking effects in CTZ and produces anti-emetic effects.

As only D2 blockers, have no 5HT4 effects.

Block CB1 receptor in and around vomiting center. Use is decreasing because of better options.

Currently only used when other agents fail. 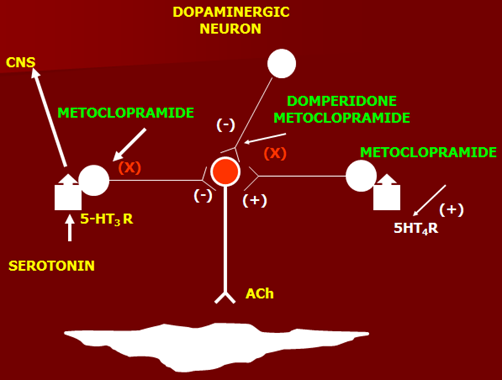 Serotonin is released from enterochromaffin like cells producing emetic effects

5HT3 blockers are primary agents in prevention of cancer chemotherapy induced nausea, vomiting and diarrhea, given 30 minutes before chemotherapy.