Biotransformation occurs in those foreign agents to whom the body is exposed, which may be for therapeutic, intentional, unintentional or recreational purposes. Once these agents gain entry, they undergo chemical reactions or remain inert. Whenever these drug molecules are administered, pharmacokinetic process occurs, first absorption sets into play, then distribution, metabolism and finally elimination takes place.

Biotransformation occurs only for the agents at physiological pH, having low molecular weight and less complex. Highly lipophilic, non-ionized, high molecular weight, or agents complexed with tissue or plasma proteins are not biotransformed easily.

Biotransformation is a process specifically to make agents more polar and excretable. If biotransformation does not occur, drugs may have longer duration of action, and undesired effects are observed along with desired ones. Biotransformation, in fact, is the inactivation of pharmacological action of drugs.

Liver is the main organ. Others include GIT, lungs, kidneys, skin, adrenals and blood (plasma).

Some of the drugs biotransformed at these sites include:

Biotransformation taking place due to different enzymes present in the body/cells is known as enzymatic elimination.

The type of biotransformation in which the enzymes taking part are soluble and present within the mitochondria. Examples include:

Enzymes responsible are present within the lipophilic membranes of endoplasmic reticulum. After isolation and putting through homogenization and fractionation, small vesicles are obtained, known as microsomes. They possess all functional, morphological properties of endoplasmic reticulum i.e. smooth and rough. Smooth ER is concerned with biotransformation and contains enzyme components while the rough ER is mainly concerned with protein synthesis.

Cytochromes are the heme proteins, present abundantly within the living kingdom. They have about thousand known kinds. Only 50 of these heme proteins are found within the humans, which are divided into 17 families and sub-families. Name is derived because it is a heme protein (abbreviation cyp) and 450 because it reacts with carbon monoxide and during the reaction absorbs light at 450 nm.

NADPH is a flavoprotein, less abundant than cyp 450.

For every 10 molecules of cytochrome P450, only one NADPH cytochrome reductase is present. 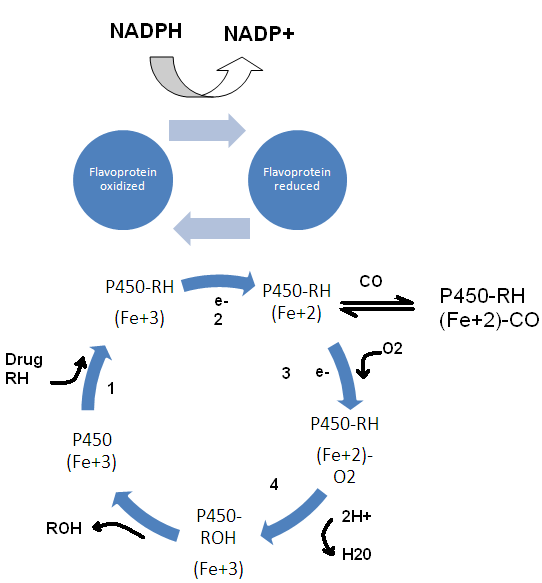 Phase I reactions are non-synthetic catabolic type of chemical reactions occurring mainly within the ER. They are the reactions in which the parent drug is converted into more soluble excretable agents by introduction or unmasking of functional component.

Drug products, which are water soluble are excreted by the kidneys. Sometimes this is not true and phase I compounds do not result in true inactivation and may act as functional components of phase II reactions.

Phase I reactions include:

e.g. Meprobamate is converted into hydroxymeprobamate

Conversion of mephobarbitone into phenobarbitone

Conversion of codeine into morphine.

Conversion of aniline into nitrobenzene

Conversion of amphetamine into phenylactate.

Conversion of parathion into paraoxon

Consequences of Phase I reactions:

5.  Biotransformation of xenobiotics to mutagenic or carcinogenic agents.

6. Conversion of xenobiotics into harmless compound.

Phase I metabolites if not readily excretable or contain component ends, combine with endogenous substrates like glucuronic acid, sulphuric acid, amino acid or acetic acid, to undergo conjugation reactions, yielding more excretable drug conjugates which are excreted by the kidneys. Phase II reactions are said to by synthetic, occurring within cytosol, while some occur within mitochondria.

Some reactions coupled with excretory pumps in the cell membranes are known as phase III reactions. Drugs undergoing these reactions, is still the subject of extensive research even today.