Tuberculosis is a chronic disease caused by mycobacteria, which are acid fast bacilli, once stained by basic dyes, cannot be decolourized by alcohol. Acid fast character is due to the presence of mycolic acids in cell wall. It gives integrity to cell wall and makes it resistant against antibiotics. Mycobacteria are of two types:
a.      Typical Mycobacteria

These bacteria are less pathogenic but more resistant to common anti-tuberculosis drugs.

There are three main principles of treatment of tuberculosis:

There are two main difficulties:

The main drugs are:

First line drugs (mainly used, treatment is started with these)

Second line drugs (only in cases resistant to 1st line) 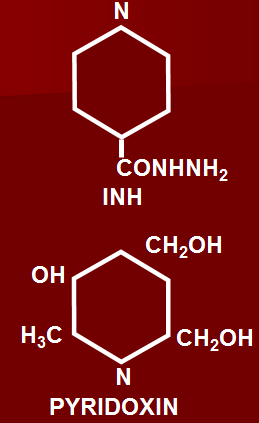 Has a narrow spectrum. Effective only against mycobacterium tuberculosis. Also  has some effects against atypical mycobacteria.

Mechanism of action of isoniazid

Drug enters the bacterial cells by active transport mechanism and is bactericidal for rapidly dividing cells and bacteriostatic for resting or dormant bacterial cells.

Drug is a prodrug and in bacterial cells is converted to active compound by enzyme catalase peroxidase. This active form acts by:

Metabolized by acetylation. There are genetically two kinds of people:

Most of the drug and metabolites are excreted in urine.

Most important adverse effect. Manifested in the form of:

Occurs mainly due to decreased/deficiency of vitamin B6 or pyridoxine.

The main thing is that it interferes with the metabolism of pyridoxine. It also causes increased excretion of this vitamin.

Person routinely taking isoniazid is given tablets of pyridoxine in dose of 10 mg daily to avoid peripheral neuropathy.

Occurs especially in elderly and patients who are alcoholic.

Rare but may occur especially when given parentally.

In joints pain especially in knee, elbow, wrist and joint of fingers.

Very important drug in the treatment of tuberculosis, belonging to the rifamycin group of antibiotics. It is obtained from Streptomyces species. Mainly rifamycin B is modified to obtain rifampicin.

Drug mainly acts by inhibiting DNA dependent RNA polymerase enzyme in bacteria. This enzyme is mainly responsible for formation of mRNA. When inhibited  no or less formation of mRNA occurs, resulting in decreased formation of proteins. The important fact is that this bactericidal action differs from other drugs which inhibit protein synthesis, as most of them are bacteriostatic drugs. Here it is bactericidal, as it acts on transcription level.

It is mainly metabolized in liver by deacetylation, drug also undergoes enterohepatic circulation.

Most of the drug is excreted in feces through bile.

Half life is about 3 to 5 hours. On prolonged use it is decreased even up to 2 hours as is enzyme inducer.

On intermittent dosing –immediately after administration of drug due to immunity and immunological basis:

Drug is enzyme inducer and can increase the metabolism of various drugs.

Differs from rifampicin in that although mechanism of action and chemistry is same as rifampicin, but differs in:

When given with enzyme inhibitors like HIV Protease Inhibitors including Indinavir & Ritonavir, and non nucleoside reverse transcriptase inhibitors, dose is reduced to half (150 mg).

Drug is very effective against mycobacteria, residing in cells and dormant. It is more active in acidic medium of cells.

More effective inside cell (acidic medium), it is a pro drug converted into cell to active metabolite pyrazinoic acid by enzyme pyrazinamidase.

Well absorbed after oral administration. Distributes to all body compartments well. It crosses blood brain barrier and attains a high concentration in CSF.

Drug is always used in combination with other drugs for tuberculosis and meningitis.

It is metabolized in liver and half life is 9 hours.

Drug is rapidly uptaken by cells. Resistance develops when decreased uptake of drug occurs by bacterial cells. It:

Mainly used for treatment of tuberculosis in combination with other drugs.

Mainly when given in high doses:

Although incidence is rare (2%) but can lead to blindness if continued.

Aminoglycoside used in combination with other anti-tuberculosis drugs.

In second line drugs, Amikacin belongs to aminoglycosides. Thiacetazone is a toxic drug having low therapeutic index, which is very cost-effective. It is used as a second line drug in treatment of tuberculosis. Half life is 13 hours. Main adverse effects are:

Mechanism of action is same as sulfonamides.

Well absorbed after oral administration. Always given with food. Drug distributes in all body compartments except CSF. It cannot cross BBB.

Metabolized by acetylation. Half life is one hour.

Drug is mainly used as a second line drug in treatment of tuberculosis.

4. Hypothyroidism when used for prolonged period.

Mechanism of action is same, it interferes with synthesis of cell wall.

Half life is about 2-4 hours. It is a very toxic drug and is mainly reserved for resistant cases of tuberculosis.

Dose is 250 mg twice daily, which may be increased to 1 g daily.

Same as that of penicillins. Interferes with synthesis of peptidoglycan.

When given orally, well absorbed. About 35% of drug is metabolized, rest is excreted unchanged in urine.

Mechanism of action –same as that of aminoglycosides

Adverse effects –same. May cause:

There are two main phases:

Patients who have not received treatment for T.B previously

Patients who have taken the treatment for less than 4 weeks

In continuation phase, rifampicin is not used with isoniazid, because patient may develop resistance to isoniazid, making the therapy monotherapy. Thus resistance against rifampicin may also develop.

In Western countries, Rifampicin is preferred in continuation phase, with which duration of treatment is reduced to 7 months.

In cases of relapse, after 1 to 2 months if symptoms  disappear and patient stops taking drugs, there is re-emergence of tuberculosis, which is difficult to treat, resulting in treatment failure.

Now the treatment is started with five drugs.

If patient is resistant to INH and rifampicin after about 5 months treatment, still acute tuberculosis bacilli is present in sputum, the patient is labeled multiple drug resistant.

Treatment is the use of second line drugs.

Patient takes medicine in clinic or undergoes supervised treatment in hospital. Patient may be called twice or thrice weekly and given anti–tuberculosis drug in front of the doctor or medical personelles. This is because the main problem is compliance of the patient. 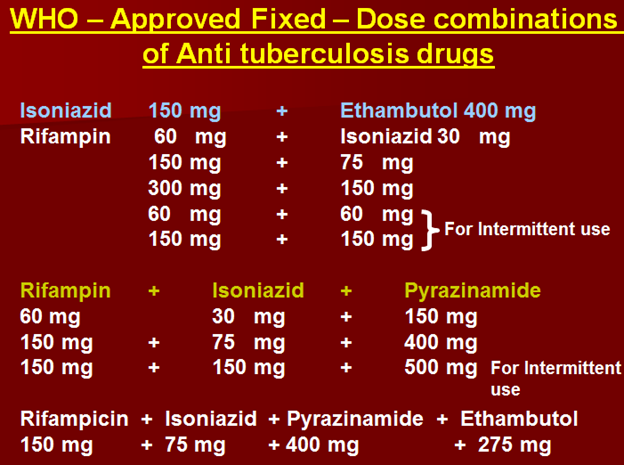