Penicillins have made revolution in chemotherapy. They were discovered in 1929 by Alexander Fleming. He noticed colony of Staphylococci, which was contaminated with Penicillium notatum. Later on, penicillins were available commercially in 1949.

Benzyl penicillin was first discovered. Its modification by chemists has led to large number of drugs which are used because of cost-effectiveness.

If penicillin is degraded, 2 types of enzymes are involved: 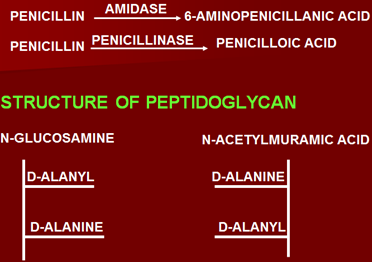 Mechanism of action of penicillin:

Main mechanisms are the altered PBPs and production of beta lactamase.

It is effective against gram positive and some gram negative bacteria.

Benzyl penicillin is mainly given I/V or by I/M route.

Dose is in range of 300-600 mg 6 hourly. In case of infections which are very severe or localized, like endocarditis, benzyl penicillin is given in very high doses of 7.2-14.4 g in the form of long acting preparations.

Benzathine penicillin (benzyl penicillin combined with ammonium base having effective plasma conc. for about one month) or procaine penicillin are used in treatment and prophylaxis of rheumatic fever, given as a single dose I/M with injection of 1.2 million units.

In case of prophylaxis of rheumatic fever 1.2 million units are given every month.

It is also used in treatment of syphilis in dose of 1.2-2.4 million units I/M.

In treatment of gonococcal infection 4.8 million units single injection should be given I/M.

It differs from benzyl penicillin in chemistry; having phenoxy benzyl group at R. it can be given by oral route as resists acids in stomach.

Methicillin –not used because of toxicity and resistance

Since these are resistant to beta lactamase enzyme, they contain acyl group in structure which protects beta lactam bond.

It can be given orally. Food interferes with absorption thus should be given one hour before or two hours after food (except methicillin). Have extensive PPB up to 90%.

In addition to the spectrum of benzyl penicillin are effective against:

These drugs can also be given by oral route. Food interferes with

Absorption, thus given 1-2 hours after meals. These drugs are ineffective

Especially that of Neisseria and H. influenzae

Ampicillin is mostly used as is rapidly absorbed from GIT, but less than amoxicillin

Some of these drugs like Becampicillin, which is a prodrug, and is converted into ampicillin during absorption from intestines. Talampicillin is also a prodrug.

Carboxy penicillins differ in that they are also effective against pseudomonas and proteus species. Most commonly used are Carbenicillin and Ticarcillin. They are always given by parenteral route.

Mainly used for treatment of infections by these organisms, mainly:

Of these carbenicillin is cost effective.

Main disadvantage is that they are given in very high doses of about 10-30 g 4 times daily. Important is the fact that these drugs are available in the form of sodium salts thus are contraindicated or used very carefully in patients suffering from hypertension, cardiac and renal disease.

Ticarcillin is 4 times more potent than carbenicillin and is also used in less doses of about 4-12 g.

Mostly common with ampicillin especially when given to patient suffering from lymphatic leukemia, viral infectious disease known as infectious mononucleosis.

If occurs, adrenaline is the treatment given.

Because when administered I/M in upper hand, damage to radial nerve may occur.

When given in buttocks, damage to sciatic nerve may occur. Precautions have to be taken. Patient is asked to bend arm, groove of radial nerve is seen, and then injection is given in upper or lower end. In buttocks, given to upper and side of buttocks.

Especially after intrathecal administration as may cause irritation of nerves especially in patients of epilepsy.

Penicillins having extended spectrum have more activity against gram negative organisms, esp. ampicillin also has local action causing growth of gram positive organisms like Clostridium deficile which will cause pseudomembranous colitis in intestine, leading to severe diarrhea after intake of ampicillin.

Also occurs with tetracyclines and quinolones having broad spectrum.

Treatment of super infections is administration of Vancomycin or metronidazole.

Can increase the effects of penicillins by displacing them from protein binding sites, when administered together.

2.      When given with bacteriostatic antibiotics, decreased activity of drugs. Bactericidal drugs are only effective against rapidly growing bacteria. Bacteriostatic drugs inhibit growth.

Penicillin is not combined esp. with chloramphenicol and tetracyclines.

Can be combined with bactericidal drugs.

But should not be given through same syringe as may lead to inactivation of these drugs.

Penicillins are given in both mg and units.

Older drugs are given in units while newer in mg.