Pharmacology is the science of drugs. It is the study of chemical substances that interact with the living things by chemical processes, especially by binding to regulatory molecules, i.e. receptors.
In 1847, Rudolph established the first institute of pharmacology.

The word drug comes from a French word ‘Drogue’ meaning a dry herb. It can be defined as: 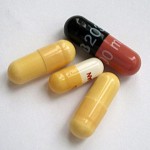 “Substance or material that is used or intended to be used to modify or explore physiological processes or pathological states, for the benefit of the recipient.”

The word Pharmacokinetics is derived from two words, Pharmacon meaning drug and kinetics meaning putting in motion. It can be defined as:
“The branch of pharmacology that deals with the absorption, distribution, metabolism and excretion of drugs and their relationship with the onset, duration and intensity of the drug effect.”
What the body does to the drug is pharmacokinetics. For example, the absorption, distribution, metabolism and excretion of Paracetamol is included in Pharmacokinetics.

Pharmacodynamics is the branch of Pharmacology that deals with the mechanism of action of drug and the relation between the drug concentration and its effect.
It is the study of physical and chemical effects of drugs on body, parasites and microorganisms.
What the drug does to the body is pharmacodynamics. For example, adrenaline acts on adrenal receptors, stimulates adenyl cyclase system producing effects such as cardiac stimulation and hyperglycemia is studied in Pharmacodynamics.

The branch of pharmacology that deals with the art and science of treatment of disease. It is the application of pharmacological information together with the knowledge of disease, for the prevention and cure of the disease.

Chemotherapy refers to the treatment of diseases by chemicals that kill the cells, specially those of microorganisms and neoplastic cells. It is classified into two divisions:

Includes the choice of drugs most potent against the organism or least toxic. Examples include Erythromycin given for gram positive organisms and Aminoglycans for gram negative organisms.

Methotrexate, which is anticancer drug. It inhibits the dihydrofolate reductase and interferes with the DNA synthesis and repair.

Vinca alkaloids, which bind tubulin of microtubules and arrest mitosis in metaphase.

Toxicology is the branch of pharmacology which includes the study of adverse effects of drugs on the body. It deals with the symptoms, mechanisms, treatment and detection of poisoning caused by different chemical substances.
The main criterion is the dose. Essential medicines are poisons in high doses and some poisons are essential medicines in low doses.

Clinical pharmacology is the scientific study of drugs in man. It includes pharmacokinetic and pharmacodynamic investigations in healthy or diseased individuals. It also includes the comparison with placebos, drugs in the market and surveillance programmes.
The main objectives are:
1. Maximize the effect of drug
2. Minimize the adverse effects
3. Promote safety of prescription

Aims include:
1. Generate optimum data for use of drug.
2. Promote usage of evidence based medicine.

Pharmacy is the branch of Pharmacology and is the art and science of compounding by dispensing drugs, preparing suitable dosage form for administration to man and animals. The health profession blends health science with chemical science and effective use of drugs.

Pharmacoeconomics deals with the cost of drugs. In this discipline the cost of one drug is compared with another for same use. The cheap drugs are preferred.

Branch of pharmacology dealing with the genetic variations that cause difference in drug response among individuals or population.
Example includes succinyl choline which is a skeletal muscle relaxant used in general anasthesia. It is metabolized by pseudocholine esterase and has short duration of action. The presence of enzyme is determined by the gene and lack of this is recessively inherited. This may lead to respiratory paralysis, apnea and death.

Pharmacogenomics is the broader application of genomic technologies to new drug discovery and further characterization of older drugs.
Recombinant DNA technology involves the artificial joining of DNA of one specie to another. E. coli is mostly used. In this way we can get huge amounts of drug in purified form which is less antigenic.
Examples include GH, interferon and vaccines.

Pharmacoepidemiology deals with the effects of drugs on a large population. The effects may be good or harmful. It is conducted in three ways:
a. Observational cohort studies
b. Case control studies
c. Phase trials

Patients receiving drugs are collected and followed up to determine the outcomes. It is prospective (forward looking) research, however, is time consuming and lengthy.

These are retrospective studies. They reverse the direction of scientific logic from forward looking to backward looking.

Branch of pharmacology dealing with the comparison of one drug to another belonging to the same or another group.

Posology deals with the dosage of drugs. Example includes paracetamol given as one tablet of 500mg thrice a day.

Animal pharmacology deals with the different properties of drugs in animals. A vast variety of animals are utilized including rabbits, mice guinea pigs, etc. Drugs are given to the animals and all parameters (their behavior, activites, vital signs, etc.) are recorded. Any change is noted down. If found to be useful in animals, then the drug is tested on humans.