The thyroid gland produces hormones which regulate different processes and include:

Calcitonin is secreted from the parafollicular cells and is a Calcium lowering hormone. T4 is the major secretory product of the thyroid gland but T3 is biologically more active than T4. 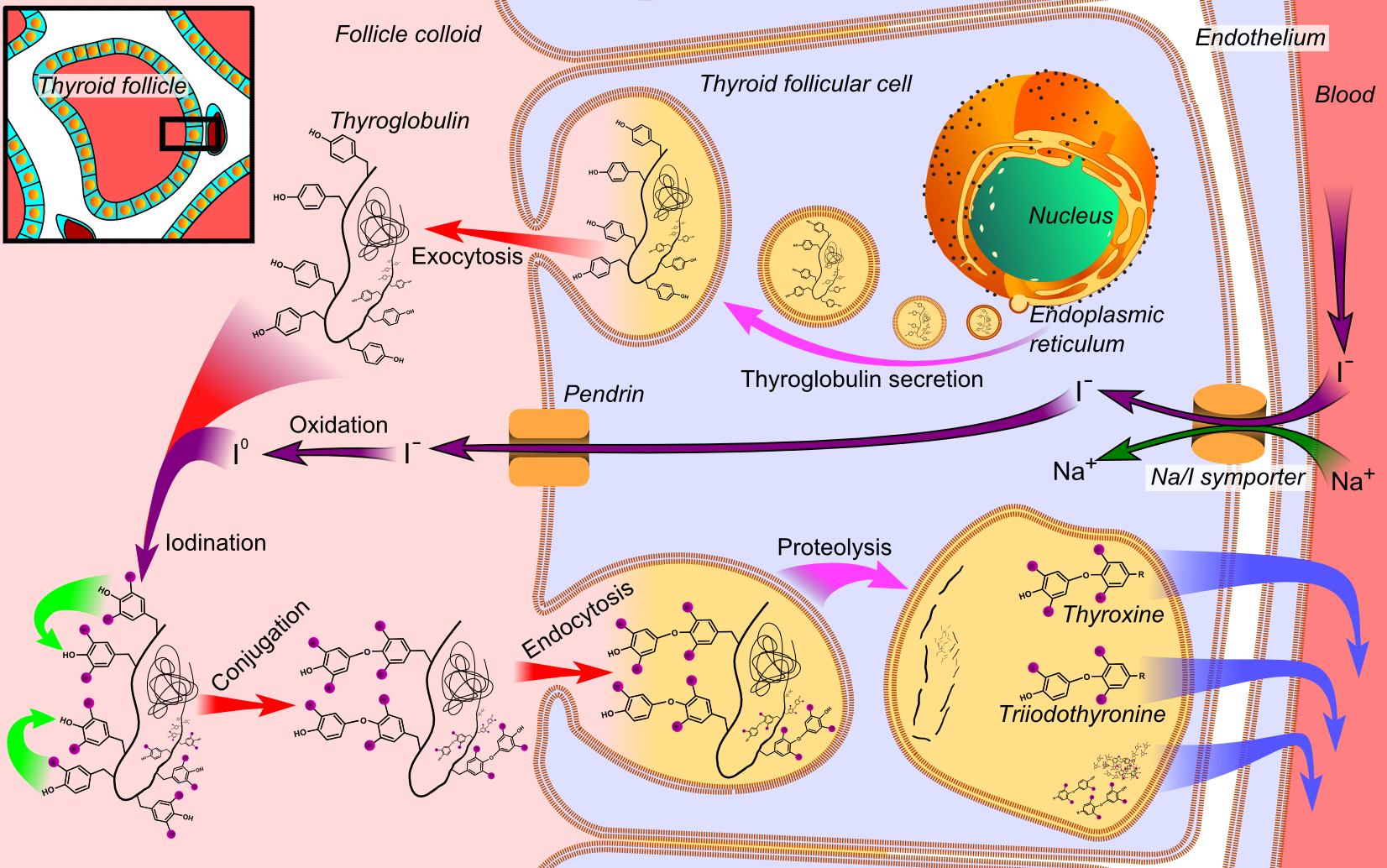 Each thyroglobulin molecule contains one to four T4 molecules. An average of one T3 molecule is present for 14 T4 molecules. The colloid of thyroid follicles have thyroid hormones sufficient for 2-3 month’s requirements.

Approximately, 99.98% of T4 is bound to three serum proteins:

T4 is converted by 5’deiodinase into:

Inactivation takes place in the liver and the target tissues. Following steps are involved:

The half life is approximately 6 days. 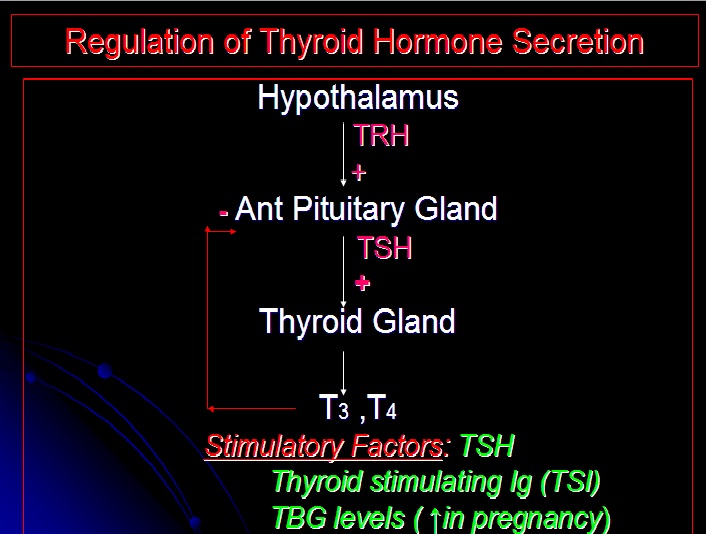 The amount of thyroid hormone is precisely regulated. Stimulatory factors include: 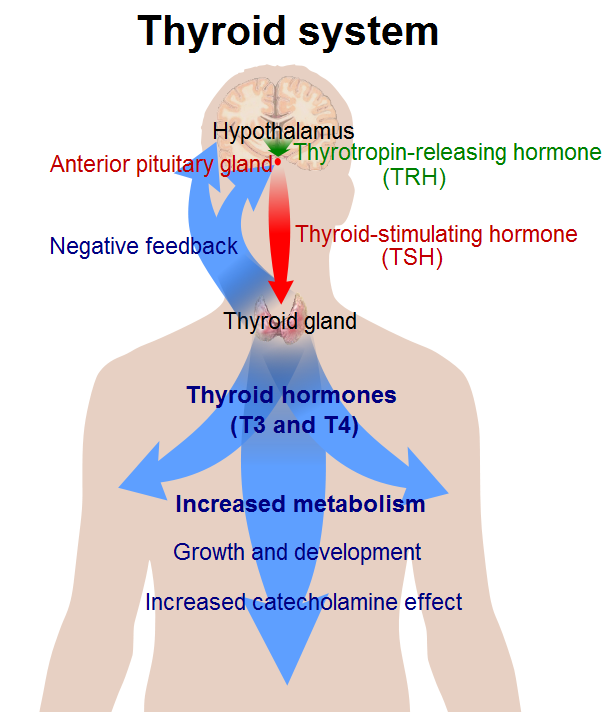 T4 is converted into its active form, which is T3 along with rT3. T3 is four times more active metabolically than T4.

Step 2: Entry of T3 into the nucleus of target cell to bind the nuclear receptor. 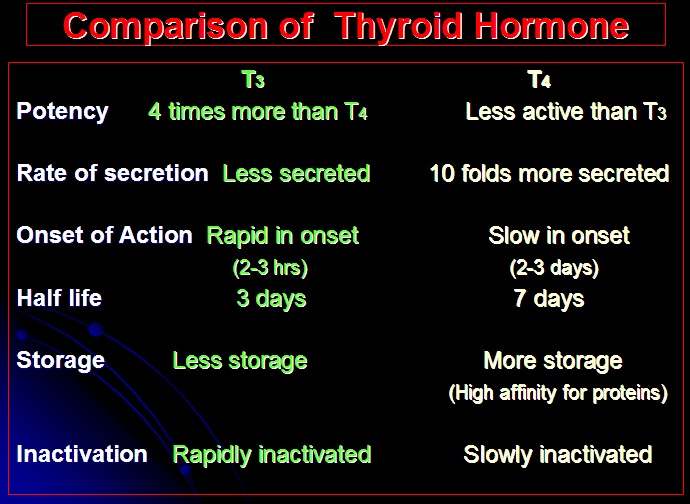 T4 has a long latent period and the peak action is observed 10-12 days after its  injection into the body.

Its half life is 15 days and there is no action on BMR for 2 to 3 days. Some activity is observed for as long as 6 weeks to 2 months.

The nature of induction of new proteins is specific to the target tissues. In most of the cases, Na+ K+ ATPase is induced which leads to an increased oxygen consumption while in myocardial cells, myosin, β adrenergic receptors and Ca++ ATPase are induced. In the liver and adipose cells, key metabolic enzymes are induced which alter the carbohydrate and protein metabolism.

In the target cells the T3 and T4 bind the intracellular receptors (T3 binds 90% and T4 binds 10%). The new proteins are synthesized which include:

The thyroid hormones act on every organ system within the body. They act synergistically with growth hormone and somatomedins to:

The most important functions of thyroid hormones are:

Muscles are affected the most by the thyroid hormones. (There is non calorigenic effect on the brain, anterior pituitary, lymph nodes and spleen). About 40% of the total heat produced in the tissues is by thyroid hormones. They increase the number and size of the mitochondria as well as their activity and lead to an increased ATP formation.

They cause uncoupling of oxidative phosphorylation and increase the BMR by 60-100% normal. An increased activity of Na+ K+ ATPase is observed in most of the cells.

Effect on Bones and Muscles:

TH is critical for normal development of the skeletal system as well as the musculature. In growing children, it enhances the growth while in hypothyroid children, growth retardation, rapid maturation of bones and stunted growth is observed.

Thyroid hormones promote growth and development during fetal life and a few years of the postnatal life. TH is essential for the normal brain development and regulates the synaptogenesis, neuronal integration, myelination and cell migration. Decreased T4 in fetus of after birth causes cretinism, which results in retarded growth and maturation of the brain. These children remain mentally deficient throughout life.

All metabolic functions are due to an overall increase in the cellular metabolic enzymes.

Thyroid hormones have an anabolic effect in low doses while in high doses, they have a catabolic effect.

Thyroid hormones cause osteoporosis and decalcification in large doses.

Increased thyroid hormones cause an increased requirement of vitamins, as these are part of the enzymes and co-enzymes.

Excess T4 leads to a decrease in body weight. A decrease leads to opposite results.

Thyroid hormones cause increased feeling of tiredness but difficulty to sleep, due to the fact that they cause increased excitability of synapses (as occurs in hyperthyroidism).

Thyroid hormones cause fine tremors at the rate of 10-15 times per second. This is because of increased activity of neuronal synapses in motor neurons of spinal cord.

Thyroid hormones cause an increase in rate and depth of breathing due to and increase in BMR. They also cause increased utilization of oxygen and more formation of carbon dioxide.

Thyroid hormones cause an increase in cardiac output (approximately 60% above normal). They cause an increase in the blood flow to the tissues, organs and the skin (to loose greater heat of metabolism). An increase in heart rate and contractility is observed due to the direct effect of cardiac output as well as the up regulation of beta adrenergic receptors. Excessive T4 may cause protein catabolism of myocardium and cardiac decompensation, leading to death. The mean arterial pressure remains normal although an increase in systolic blood pressure is observed along with decrease in diastolic blood pressure. The pulse pressure rises.

Thyroid hormones cause an increase in motility and secretions leading to diarrhea. An increased appetite and food intake is observed. In hypothyroidism, constipation is usually seen.

An increase in secretions of most endocrine glands is caused by thyroid hormones e.g. Insulin, parathyroid hormone, adrenocorticotrophic hormone, glucocorticoids.