Hypothyroidism and Hyperthyroidism-Disorders of Thyroid Gland

Thyroid gland is the first endocrine gland for known deficiency disorder since 1850. Cretinism is the mental and physical growth retardation in patients without thyroid gland. In 1891, these patients were given hormone replacement therapy by administering “ Crude Thyroid Extract”.

a. Hypothyroidism In Adults

Secondary hypothyroidism is due to:

b. Pituitary failure, with rise in TRH and fall in TSH and T4 and T3 levels.

c. I-deficiency, along with increased TRH and TSH and decreased T4 and T3 levels.

d. Resistance of target tissues (rare): due to down regulation of        hormone receptors (accompanied by normal hormone levels  (or sometimes elevated).

Thyroid goiter in hypothyroidism is caused by:

a. I – deficiency (Endemic colloid Goiter)

b. Enlarged thyroid gland which might be 10-20 times normal

Idiopathic nontoxic colloid goiter is an enlargement of thyroid similar to endemic colloid Goiter. There is no iodine deficiency. The T4 may be low or normal along with signs and symptoms of mild thyroiditis.

Symptoms of hypothyroidism include the following:

This is due to increased filtration of fluid out of capillaries & accumulation of osmotically active mucopolysaccharide in interstitial fluid, containing  hyalluronic acid and sulphates bound with proteins.

Replacement therapy by thyroxin is the treatment generally used.

b. Hypothyroidism In Infants

Hypothyroidism in infants causes cretinism due to lack of thyroid gland or mal development of thyroid. Retarded growth is seen along with thick skin, coarse hair and delayed development of milestones. Skeletal growth less than that of soft tissues accompanied by: 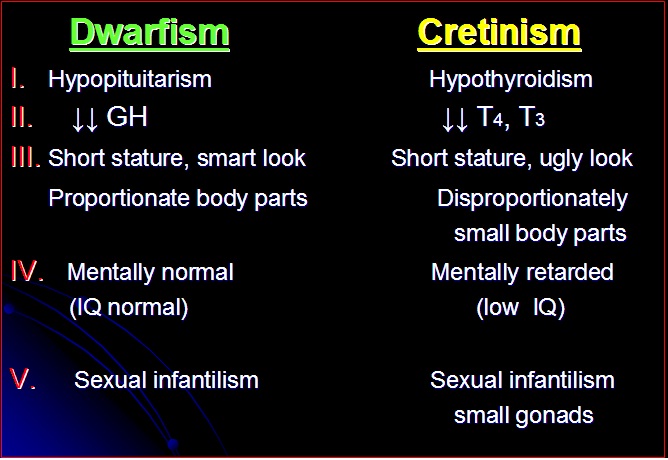 Hypothyroidism is caused by:

I. Thyrotoxicosis or toxic goiter (2-3 times enlargement is seen). An increase in T4 and T3 is observed along with a decrease in TSH. The most common form of this is the Grave’s disease (constituting about 75% of the total cause of thyperthyroidism). This is another example of autoimmune disorder due to increased TSI. TSI is the Thyroid Stimulating Immunoglobulin, which includes the antibodies to TSH-receptors on follicular cells. The antibodies prolong the action (upto 12hrs) of TSH (which normally is only about 1hr) and cause hypertrophy and hyperplasia of thyroid gland. The result being 5-15 times increase in T4 and T3 secretion.

The symptoms of hyperthyroidism include:

Exophthalmos is seen in about 1/3rd of the patients. It is the protrusion of eye balls due to edematous swelling of retro-orbital tissues and degenerative changes in extra ocular muscles. If the optic nerve stretches there might be loss of vision. The eye lids are difficult to close while asleep which may damage the cornea.

Diagnosis can be made by an increased free T4 and T3 and decreased TSH (may even be zero). BMR is increased by about 30 to 60% above normal. TSI is increased (low in thyroid adenoma)

Treatment is by anti thyroid drugs (PTU). Thyroidectomy may be considered as well. β-blockers and radioactive iodine (5 mcu) is also applied. 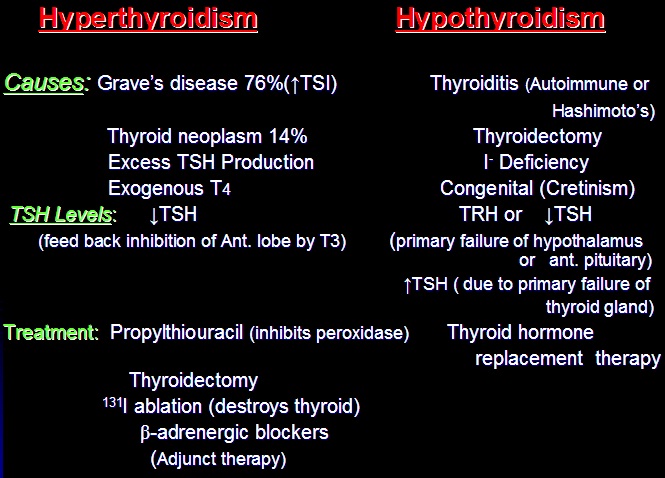 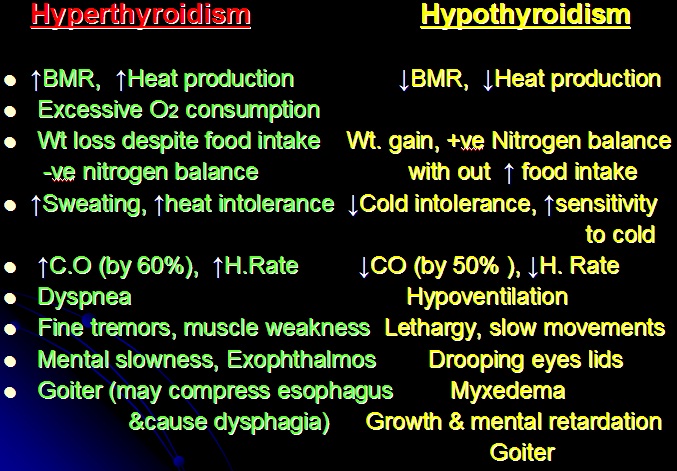