Anterior tibial artery is the smaller of the terminal branches of the popliteal artery. It arises at the level of the lower border of the popliteus muscle. It passes forward into the anterior compartment of the leg through the opening in the upper part of interosseous membrane. It descends on the anterior surface of the interosseous membrane, accompanied by the deep peroneal nerve.

In the upper part of its course, it lies superficially in front of the lower end of tibia. After passing behind the superior extensor retinaculum, it has the tendon of extensor hallucis longus on the medial side and the deep peroneal nerve and the tendons of extensor digitorum longus on the lateral side. This is the site where the pulsations can be felt.

2. Anastomotic branches which form anastomosis around the knee and ankle joints.

On entering the sole between the two heads of the first dorsal interosseous muscle, it joins the lateral plantar artery. The first plantar metatarsal artery supplies the cleft between the big and second toe.

It crosses the dorsum of the foot below the ankle joint.

It runs laterally under the extensor tendons opposite the bases of metatarsal bones. It also gives metatarsal branches to the toes.

It supplies both sides of the big toe. 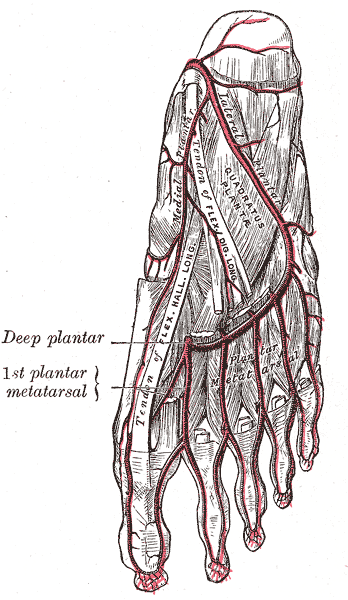