Radial artery, a smaller terminal branch of brachial artery, arises in the cubital fossa at the neck of radius. It passes downwards and laterally beneath the brachioradialis resting on the deep muscles of forearm.

In the middle third of its course, superficial branch of radial nerve lies on its lateral side.

It leaves the forearm by winding around the lateral aspect of wrist to reach the posterior surface of hand.

Branches of the radial artery in the dorsum take part in the anastomosis around the wrist joint.

The dorsal digital arteries pass to the thumb and the index finger.

Radial artery leaves the dorsum by turning forward between the proximal ends of the first and second metacarpal bones and the two heads of first dosral interosseous muscle.

On entering the palm, radial artery curves medially between the oblique and transverse heads of adductor pollicis and continues as the deep palmar arch.

Deep palmar arch is the direct continuation of radial artery. It curves medially beneath the long flexor tendons and infront of the metacarpal bones and the interosseous muscles. The arch is completed on the medial side by the deep branch of ulnar artery. The curve of the arch lies at the level of the proximal border of the extended thumb.

The deep palmar arch sends branches superiorly and takes part in the anastomosis around the wrist joint. Inferiorly, it joins the digital branches of superficial palmar arch.

Branches in the Palm:

1. Arteria radialis indicis supplies the lateral side of index finger.

2. Arterial princeps pollicis divides into two branches which supply the lateral and medial side of thumb. 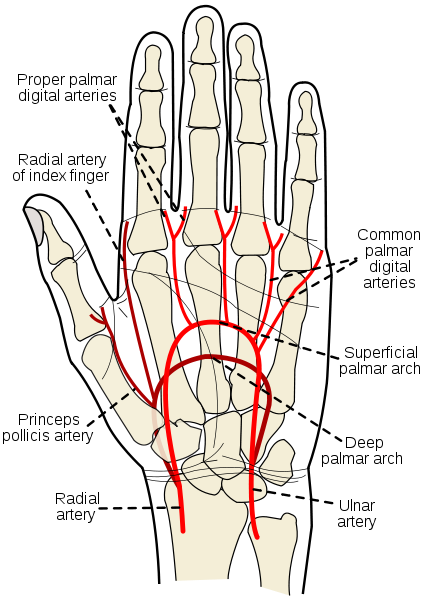