Cerebral ischemia, also called brain ischemia, occurs when the blood supply to the brain is unable to meet the required demands leading to cerebral hypoxia, resulting eventually in cerebral infarction.

Normal cerebral blood flow (CBF) in man is typically in the range of 45-50 ml/min/100g between a mean arterial pressure (MAP) of 60 and 130 mmHg. When CBF falls below 20 to 30 ml/min/100g, marked disturbances in brain metabolism begin to occur, such as water and electrolyte shifts and regional areas of the cerebral cortex experience failed perfusion. At blood flow rates below 10 ml/min/100g, sudden depolarization of the neurons occurs with rapid loss of intracellular potassium to the extra-cellular space. Minimum MAP of 45 to 50 mm Hg is required to preserve cerebral viability in man.

•    Within 20 seconds of interruption of blood flow to the mammalian brain under conditions of normothermia, the EEG disappears
•    Within 5 minutes, ATP depletion takes place
•    Potassium efflux out of ICF and sodium and calcium begin to enter the cells
•    Sodium influx results in a marked increase in cellular water content, particularly in the astrocytes
•    Normally, calcium is present in the extracellular fluid at a concentration 10,000 times greater than the intracellular fluid.
•    Increased intracellular fluid calcium enhances the conversion of xanthine dehydrogenase (XD) to xanthine oxidase (XO).
•    During ischemia, the hydrolysis of ATP via AMP leads to an accumulation of hypoxanthine “XO”
•    Upon reperfusion and reintroduction of oxygen, XO may produce superoxide and xanthine from hypoxanthine and oxygen
•    Haber-Weiss reaction is as follows
•    O2- + H2O —-Fe3 —- O2 + OH-+ OH-
•    During reperfusion and re-oxygenation, significantly increased levels of several free-radical species that degrade cell and capillary membranes have been postulated
•    O2-, OH-, and free lipid radicals (FLRs) are produced
•    O2- may be formed by the previously described actions of XO and/or by release from neutrophils which have been activated by leukotrienes
•    Re-oxygenation also restores ATP levels, and this may in turn allow active uptake of calcium by the mitochondria, resulting in massive calcium overload and destruction of the mitochondria
•    Lactate levels above a threshold of 18 – 25 micromol/g result in currently irreversible neuronal injury.

Excitotoxins are the excitatory neurotransmitters, which are released during ischemia, play an important role in the etiology of neuronal ischemic injury.
Those areas of the brain which show the most “selective vulnerability” to ischemia, such as the neocortex and hippocampus, are richly endowed with excitatory neurotransmitter. They facilitate calcium entry into neurons & these agents are neurotoxic. These include AMPA (alpha-amino-hydroxy-5-methyl-4-isoxazole proprionic acid) and NMDA (N-methyl-d-aspartate receptors). 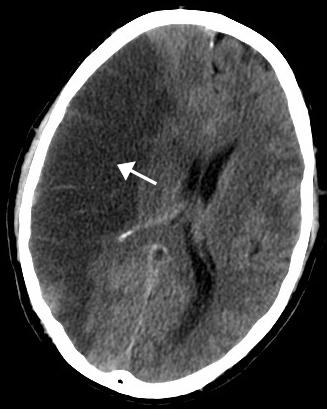 •    Within seconds of the onset of cerebral ischemia, brain interstitial space almost completely disappears.
•     After 10 minutes of GCI, a significant number of cells (but not all) show clumping of nuclear chromatin and a modest increase in electron lucency
•    After 60 minutes of GCI, the above changes have become more pronounced with more conspicuous swelling of the ER cisternae. The mitochondria begin to show slight inner matrix swelling and occasional flocculent densities
•    After 120 minutes of GCI, the changes discussed above are more pronounced and a larger number of mitochondria exhibit the presence of flocculent densities evidencing calcium overload which is currently considered irreversible.