Hormones are chemical messengers, directly secreted into the blood or extracellular fluid, which bind specific receptors on target cells, to initiate a cascade of events within the cells, producing the effect.

Mechanism of Action of Hormones:

Hormone receptors are membrane proteins which are specific for each hormone. Their sensitivity or responsiveness is determined by:

The sensitivity of receptors can be changed by the change in number of receptors, which can occur by:

i.e. inactivation or activation of receptors by down regulation or up regulation. Example is the increase in tri-iodothyronine by a decrease in TRH receptors in anterior pituitary gland.

Down regulation of receptors can occur by:

G-protein is the membrane bound protein which couples hormone receptor to the effector enzyme. It consists of three sub domains:

α-GDP or GTP, β and γ. The G-protein might be excitatory of inhibitory.

The first step is the binding of hormone to the G protein (which is inactive) to the receptor. The G protein complex is activated. The α subunit dissociates and interacts with the membrane bound target protein (enzyme) to initiate intracellular signal.

The hormone binding site is located on the outside of the cell membrane and the catalytic or enzyme binding site on the inside. E.g. leptin, a cytokine, does not have enzymatic activity but signal through associated enzyme.

1. In or on the surface of cell membrane, e.g. protein or peptide hormones and catecholamines.

2. In the cytoplasm, e.g. steroid hormones.

The endocrine gland releases hormones that bind with specific receptor on target cells and trigger intracellular signals by:

The membrane permeability is altered by opening or closing or ion channels like Na+, K+ or Ca++ channels. Examples include the action of catecholamines and acetyl choline.

There are several types of 2nd messenger systems. These include: 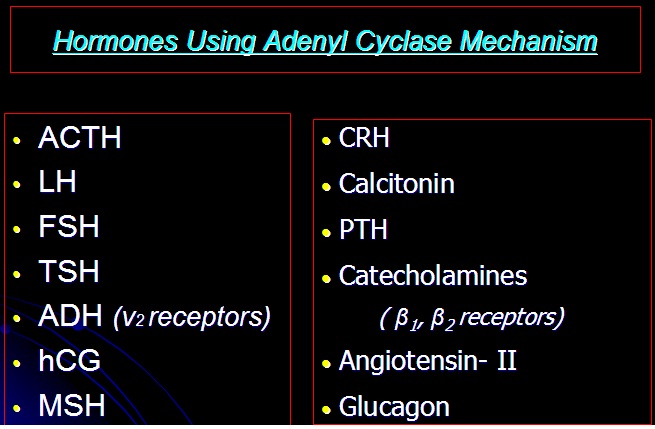 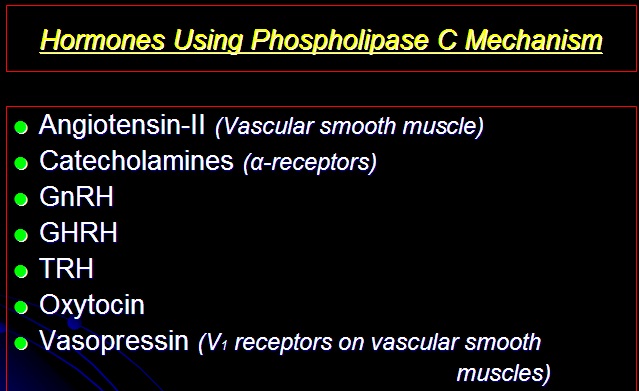 Ca Calmodulin Mechanism operates in response to the Ca++ entry into the cell. The Ca++ entry may be initiated by:

Once calcium enters the cell, binding of Ca++ with calmodulin takes place. Then the activation or inactivation of calmodulin dependent protein kinase occurs.

3. Hormones Action through activation of Genes and Protein Synthesis:

The hormones also act through nuclear transcription and ribosomal translation. The proteins are synthesized which function as enzymes, transport proteins or structural proteins. Examples include the steroid hormones, cortisol, aldosterone and T4, etc.

Neural mechanisms involve the secretion of catecholamines by adrenal medulla.

Long loop feedback involves the hormone feedback all the way back to the hypothalamic-pituitary axis.

In this case, the hypothalamic hormones inhibit their own secretions. E.g. GnRH.

Feedback loops are used to regulate the secretion of hormones in the hypothalamic-pituitary axis. An important example of the negative feedback loop is seen in control of thyroid hormone secretion.

Positive feedback mechanisms involve the effect of estrogen on secretion of FSH and LH by anterior pituitary as well as the effect of oxytocin.

The clearance of hormones is determined by two factors:

1. Rate of secretion of hormone into the blood

2. Rate of removal of hormone from blood i.e. rate of metabolic clearance.

Hormones are cleared by:

Water soluble hormones(peptides and catecholamines) are degraded by enzymes in the blood or tissues and are excreted by kidneys or liver. They have a short half life.

Lipid soluble hormones(steroids) are protein bound and are cleared slowly.