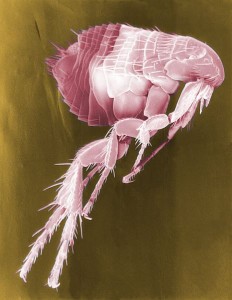 Fleas are known to transmit the following diseases: Plague, endemic typhus and chiggerosis.

Distribution:  Flea are found throughout the world on their normal host, in the nest, burrow and hair of their host.

Bites: Both the sexes bite and suck the blood from their host.

Feeding: Both the sexes are ecto-parasites and feed usually once a day.

Dispersal: Flea can not fly but they jump about 4 inches when starved. Mainly flea are disperse by their host.

Life period: Adult flea may live up to one year.

Flea are small wingless insects and the body is covered with strong bristles backwardly. The body of flea is divided in to head, thorax and abdomen.

Head : The head is conical in shape and bears short piercing & sucking type of mouth parts, which project downwards from the head.

Thorax : The thorax is composed of pro-thorax, meso-thorax and meta-thorax and from each thorax one pairs of strong legs attached. The hind legs are modified for jumping. Flea has no wings.

Abdomen: The abdomen consists of 10 segments. In male a penis is present on last abdominal segment and in the female a spermatheca is present in the posterior part of the abdomen.

There are four stages in the life cycle of flea and metamorphosis is complete.

The eggs normally hatch in 2- 7 days.

Larvae: The larvae are small, legless, white in color and bear long hair on their bodies. The larvae has no eyes but very sensitive to light. Larvae feed on organic matters and the blood in the feces in the adult flea. There are three larval stages and the last stage form a cocoon. The duration of the larval stage is about 2 weeks.

Pupa: The pupa develops inside the cocoon. The pupal stage last for 1- 2 weeks depending upon environmental conditions.

Adult:  The life cycle of a flea may be completed within  3 weeks. The infected flea may live for 1 year.

Biting: The chief method of transmission in case of plague is the bite of hungry blocked flea. Some flea which ingest plague bacilli become blocked due to the multiplication of plague bacilli in their stomach. Flea affected in this way are called blocked flea, so due to this blockage flea are unable to obtain further blood feed. Because of hunger, flea begin to bite more forcefully to suck the blood, so instead of sucking blood it injects plague bacilli to the wound. Such blocked flea play a great role in the spread of plague.

Mechanical transmission: It takes place from the proboscis of the flea, which had fed recently on infected rodent.

Feces: The fecal drop of infected flea may contain numerous bacilli. When the host scratches the flea bitten area, there is a direct inoculation of the infected agents in to the injury spot.

1. Insecticidal control: The cheapest control measure is the use of DDT dust but the rat flea have developed resistant to DDT. In such areas carbryl or dizanon (2%) or malathian (5%) are proven to be effective. The spray should be applied to floors and walls up to a height of about 1 feet. Animal host like cat and dogs premises should also be sprayed with these insecticides.

2.Repellents: Deet and benzyl benzoate are effective flea repellents. It should be applied to the exposed parts of the body. Clothing impregnated with di-ethyltouamide repels flea for more than a week.