Plasma Half Life of Drugs

For example, after intravenous administration, if maximum concentration is 16 mg and the half life is 2 hours, after 2 hours 8 mg will be left, and so on. 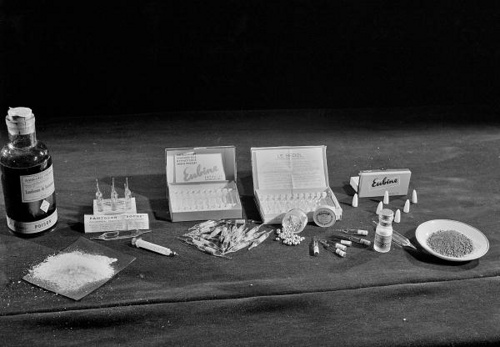 Most of the drugs have alpha half life and remain in the plasma. Drugs having beta half life have two half lives, one in the plasma and one in the tissues. They are highly distributed drugs. Their total time of elimination is more.

When the drug is absorbed and reaches the plasma, it is distributed to the tissues. Some drugs have high volume of distribution and are distributed to various tissues,  mostly adipose tissue. More time is required for their elimination, thus have greater half life. More the clearance of a drug, shorter is the half life.

Thiopentone sodium us used as a general  anesthetic. It is administered through intravenous route and has very short duration of action (about 5 to 10 min). After administration, the drug immediately goes to the brain, produces its effects, then leaves plasma to get deposited in the tissues. It is slowly released from here. Once it leaves the brain, person regains consciousness but because it is deposited in the tissues, person keeps on feeling drowsy. Elimination half life is about 7 to 10 hours.  Alpha half life is about 2 to 5 minutes.

Plasma half life of some drugs:

Protein bound drug produces no effect and is not excreted because proteins are not filtered by glomeruli. It is thus slowly released. Drugs having plasma protein binding have longer half life ( directly proportional). Acidic drugs bind albumin while basic drugs mostly bind globulins.

Example includes warfarin, an anticoagulant, having very long half life due to extensive protein binding.

The rate of absorption, metabolism, biotransformation and excretion are considered in pharmacokinetic pattern. Most important pattern is the pattern of elimination of drug, consisting of:

Pharmacokinetic pattern of drug elimination can be divided into:

In zero order kinetics, fixed amount is excreted in unit time. If plasma concentration of a drug is 100 mg and fixed amount is 10 mg, after first hour 10 mg will be eliminated, after second hour 10 mg, and so on. The capacity of body to eliminate drug is saturable, so also called saturation kinetics.

Most of the drugs follow the first order kinetics in therapeutic doses. When the dose is increased, ultimately a point is reached where systems of metabolisms become saturated, then only a fixed amount of the drug is excreted in unit time.

Doctor needs to be extra careful with these drugs and monitor their plasma levels. Alcohol stays in blood because of zero order kinetics. Thus a dose of alcohol taken at night is still present in the blood in the morning.

Some of the drugs when taken need to be converted to active metabolites. Thus they have longer half life. Example includes diazepam, which is a sedative hypnotic. It has 72 hours long half life. Aspirin has a half life of 15 minutes but salicylic acid has half life of 2 hours.

Some drugs are metabolized in the liver. They are conjugated with glucuronic acid and excreted into the bile. In the intestines, the conjugate is broken down by the bacteria and enzymes. The active drug is released and is reabsorbed. These drugs have a longer half life. Examples include rifampicin, doxycycline, spironolactone and digitoxin.

Greater the volume of distribution, more is the half life.

Drugs having short half life, the interval between the doses is kept short and are given frequently to maintain minimum effective plasma levels.

When the drug is given by constant intravenous infusion or given repeatedly in fixed doses at fixed intervals, plasma concentration of drug rises gradually, and if patient is still taking the drug at fixed intervals and doses, it reaches a peak value and then plateau is reached.

The amount of the dug in plasma becomes constant. This can only be reached when fixed doses of drugs are given after regular intervals. At steady state,

For the drugs which need to be monitored, first sample is taken after the steady state has been reached.

Lithium for bipolar disorder is an example. Plasma levels are maintained by repeated examinations because the drug can be toxic. Its half life is about 24 hours, so the plasma levels are checked after 5 days.

Drugs having short half lives have shorter time for complete elimination. 90-95% of the drug is eliminated after four half lives.

Drugs having half life less than two hours:

Drugs having half life between two to five hours

Drugs having half life between ten to twenty four hours

Drugs having half life greater than thirty six hours